The 3D Touch on iPhone 6s and 6s Plus has been gaining ground quite fast. With abundant apps catching support for the feature, iOS is opening up to new dimensions in terms of control and accessibility. You might have seen a lot of iPhone 7 concepts in the past few months, today a designer has come up with a unique iOS 10 concept, showcasing the Control Center in all its might. Let's head down and see what changes does the designer want to see in the Control Center. 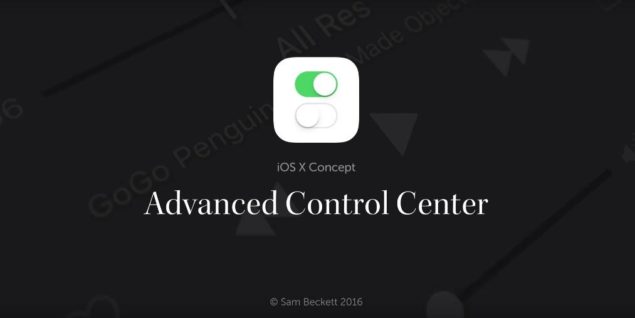 Over the past few years, concept designer Sam Beckett has made some astonishing videos that outstretch some of the possible ways by which Apple can modify its mobile OS. The latest concept from the designer tackles the Control Center and how it could be integrated with the 3D Touch feature found in Apple's latest handsets. 3D Touch integration in the Control Center in iOS 10 could lead to an orifice of improved features in the OS, customizing hardware toggles and shortcuts for apps.

In the iOS 10 concept, Beckett adds a new layer of toggles in the Control Center which can be customized completely using the 3D Touch functionality. All that the user needs to do is either long press on the toggle or hard press it. Contextual commands can be put upon toggles as well, as the video embedded below demonstrates.

Moreover, a user can also reposition toggles by long pressing them, as iOS users would do to position apps on the Home screen according to their preferences. Moreover, the concept also emphasizes on replacing toggles with the ones that you mostly use with the one that you don't need. Furthermore, a system dark mode for customizing the Control Center's appearance can also be seen in the video, which is definitely a plus for all the night owl users out there.

It is definitely one of the smartest concepts designed by Beckett. Although iOS lags behind Android in a lot of aspects, it would not be wrong to say that the Cupertino camp introduces a lot of new features in its every iOS release. Probably, in the coming WWDC event, Apple will unveil a lot of changes in its tenth version of iOS. Nonetheless, the use of 3D Touch in the Control Center would be a welcome change for all and could possibly make room for more customization needs of the user.

This is it for now, folks. Did you like the new iOS 10 concept video? What are your top features that you think should be part of iOS 10? Share your thoughts in the comments.