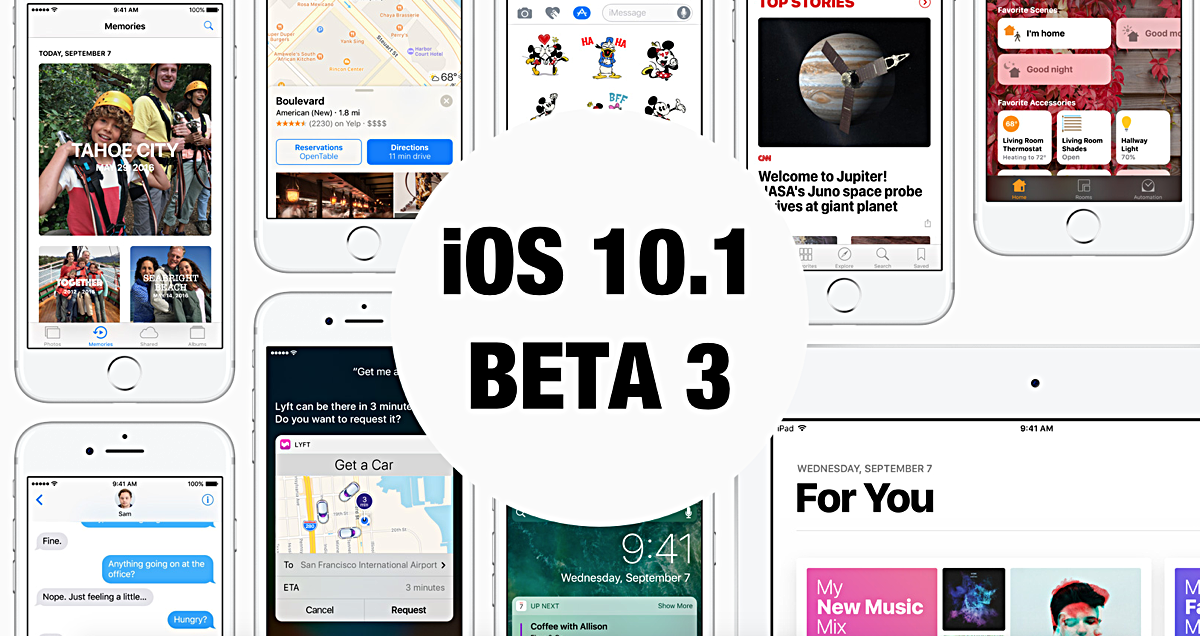 Apple has released iOS 10.1 Developer Beta 3 for compatible iPhone, iPad, iPod touch devices. The new release is available over the air as well as directly from Apple.

Exactly one week ago, Apple released the second beta of iOS 10.1 to developers. Today, Apple is taking its development process further with the release of iOS 10.1 Developer Beta 3. As you can tell from its name already, the pre-release build of Apple's new software is available for registered developers only. And if you have iOS 10.1 installed on your device right now, you'll be pleased to learn you can download the latest build over the air, no need to be tethered to a computer at all.

In order to update over the air, first of all make sure your iPhone or iPad is charged beyond the 50% mark. Leaving your device connected to a wall outlet will suffice as well. Once that is out of the way, connect to a fast and stable WiFi network. Then navigate to Settings > General > Software Update. Just give it a few seconds and the third beta will pop up for download. Tap on the 'Download and Install' button to request the update and begin downloading it.

Once the download is complete, you'll be prompted for installation. Make sure you take appropriate steps before going ahead. After all, your device will restart and you will lose contact with the outside world till things boot back up again.

If you're looking to install iOS 10.1 Beta from scratch, then you can download the pre-release bits from Apple's Developer Program website.

iOS 10.1 is available for Public Beta testers as well, and it's absolutely free, unlike its developer-oriented counterpart. For more information on how to download the beta onto your device, simply check out this post: You Can Now Download iOS 10.1 & macOS 10.12.1 Public Beta.

iOS 10.1 Beta is mainly directed towards iPhone 7 Plus users as it brings the famed depth-of-field effect feature to the smartphone. But of course, apart from that, Apple has packed a bunch of bug fixes and performance enhancements under the hood, ensuring things tick along nicely for everyone out there.

Given how stable iOS 10.1 Beta is in its current form, we encourage users to give it a try on their device. Just make sure you take a backup of everything before going ahead with the installation. And in case you do not like anything at all in iOS 10.1 Beta, you always have the option of rolling back to the current public build of iOS 10. Just make sure you follow our downgrade guide posted here: Downgrade iOS 10.1 Beta to iOS 10 – How to.

If Apple has tossed in a surprise or two in iOS 10.1 Developer Beta 3, we will highlight it, so stay tuned. Meanwhile everyone else should go ahead and update right away if they're running an older beta on their device.