On 10th June Apple will finally unveil iOS 7 at Worldwide Developers Conference 2013. For more than a couple of months now we have seen many iOS 7 concepts being posted on the internet. These concepts are based on popular rumors about the changes that Apple is expected to unveil. Today we're covering a different kind of iOS 7 concept. Developed by Steve King, this is the first interactive iOS 7 concept that is playing on a mockup iPhone 5S. By interactive, we mean that you can play around with it and get a sense of what Apple's upcoming iOS platform update may feel like. 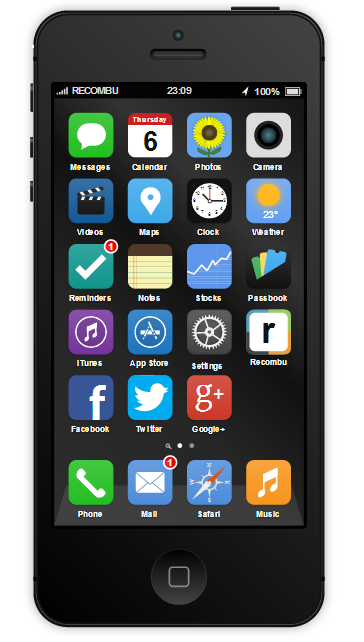 After some senior management executive level changes took place at Apple, the iOS 7 design now comes under Sir Jony Ive, who is well known for the amazing work he has done in hardware design. Former SVP of iOS Scott Forstall is no longer working at Apple, which is one of the reasons why iOS 7 is supposedly going to tone down on skeuomorphism. The overall UI of iOS 7 is said to be cleaner, with no glossy effects and clear lines. This is called a flat UI, and it has already been applied to some extent in Windows Phone 8.

This particular iOS 7 concept shows off some tweaked features in the upcoming update. Native apps such as Phone, Calendar, Reminders, Camera, Messages, Notes, Mail and Safari are all depicted similar in operation to iOS 6, however in terms of design, all of these apps show a very clean and flat user interface. You can try out this iOS 7 concept for yourself by going to the following location: recombu.com/mobile/interactive/iphone-5s-ios7-concept/.

As far as the iPhone 5S is concerned, there have been many rumors about this device. It is widely believed that Apple will release its next generation iPhone around the holiday season. Apple CEO Tim Cook has also said that the company's new products should be expected by September at the earliest. Nevertheless we have consistently been hearing rumors about an iPhone 5S release at WWDC 2013. Apple has announced several iPhones at this annual conference in the past, but it recent years it went away from that tradition. Are we going to see some changes in tradition this time around? Time will tell.