First benchmarks of Intel's Upcoming Sandy Bridge-E Processors have been leaked over at Coolaler Forums. The Sandy Bridge-E chip tested was an Core i7 3930K Engineering Sample which was tested on a LGA2011 X79 Chipset based Motherboard.

The Chip was tested in various CPU benchmarks against the current Core i7 980X Processor. The Core i7 3930K CPU was already detailed by us over here, Its a 6 Core CPU featuring 12 Threads, Stock Speed of 3.20Ghz (Turbo – 3.80Ghz) and 12MB L3 Cache. The K Logo represents that the CPU will feature an Unlocked Multiplier which would allow overclocking.

The guy who benchmarked the CPU's disabled the Turbo Mode for both processors for a Clock-to-Clock Speed Comparison. Also we can see a Rated TDP of 130W listed in CPU-z, This may improve with the final revision of the Processor. Also the Corei7 980X was equipped with Tri-Channel Memory due to LGA1366 platform while the X79 chipset allows for Quad Channel Memory Support.

Following are the benchmark results: 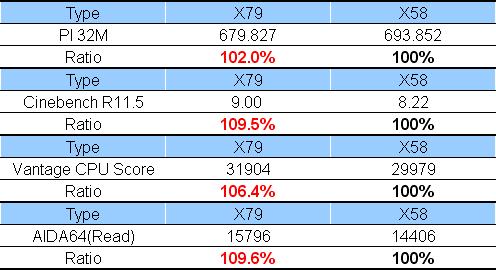 Not a huge amount of performance leap over the 980X but considering its still an Engineering Sample and had Turbo Boost turned off, The final revision would surely show huge improvements, Plus we can clearly see the improvement in AID64 with the Quad Channel Memory Interface. The Core i7 3930K is expected to launch in Q4 2011 at a price range of 500US$. More info on Sandy Bridge-E and pics of the benchmarks below:

(Thanks alot to Coolaler Forums for posting these benchmarks and comparison)