Today we have some more leaked benchmarks for you, this time of the Coffee Lake variety. The benchmark in question stems from the venerable SiSoft Sandra database which recently listed a Coffee Lake 6 Core / 12 Thread processor. The entry can be found over here. Coffee Lake is the code-name of the platform that will carry forward the optimized 14nm architecture found in Kaby Lake to more than 4 cores for the mainstream segment.

Now you may be confused between the hot mess of codenames that is Intel's product roadmap, so I think I will take this time to clarify a bit. Intel's Kaby Lake will be soon be followed up by Intel Coffee Lake on the 14nm Process. Coffee Lake is basically Kaby Lake's 'optimized' architecture but in variants that support more than 4 cores (remember KBL was limited to 4 cores only). This is also why we know that the CPU tested is part of the Coffee Lake lineup because it shows the Kaby Lake client on the SiSoft Sandra entry but has 6 Cores - which puts it neatly in the CFL camp.

The entry reads Genuine Intel CPU 000, is part of the KabyLake family and has 6 Cores/12 Threads. The processor is clocked at 3.5 GHz, which is a decent base clock for a hexa-core part and 94.97 GOPs on the SiSoft Sandra benchmark (not that this is a very good indicator of real-life performance). The processor has 256 KB of L2 per core and 9 MB of shared L3 cache. There is also a variant that supports 12 MB of L3 cache. Both are engineering samples and feature a turbo clock upwards of 4.2 GHz. The IMC is clocked at 2.7 GHz which means you are looking at DDR4 2700 MHz. You can expect all clocks on the final version to be at least this high, if not a few hundred MHz more.

One of the more interesting of leaks was the CNL-PCH block diagram which details the Coffee Lake-S and Coffee Lake-H series processors. Intel will keep support on the CNL-PCH intact. The new chipset does mean that Intel has the opportunity to change the socket and considering the unusual die structure and later support for 10nm processors, we can expect that to happen. LGA 1151 will have served two processor generations by then, Skylake and Kaby Lake. 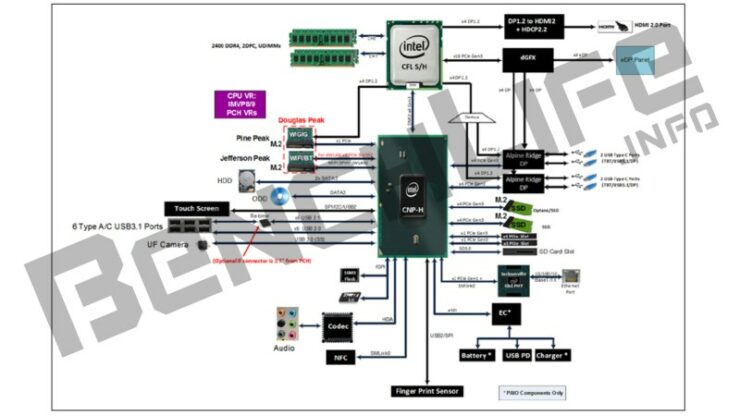 Starting with the details, we have the Coffee Lake-S/H series processors which can support DDR4-2400 MHz memory (native) in dual channel mode. The GPUs on these chips allow support for DP 1.2 to HDMI 2.0 and HDCP 2.2 connectivity. There’s also several x16 PCIe Gen 3.0 lanes which can be used to power discrete graphics and eDP Panels for smoother frame rates.