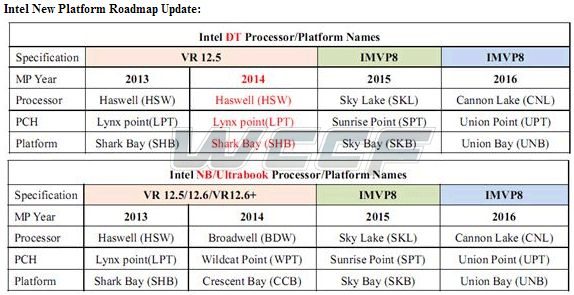 Intel's Cannonlake 10nm Microarchitecture is Due For 2016

If thing's go smooth with Skylake, then Cannonlake will hit shelves in 2016 available for both desktop and mobile platforms. Currently, the Intel Broadwell has disrupted due to 14nm manufacturing issues faced by Intel fab unit and won't arrive market till late 2014. The only Broadwell processors consumers will get these year will be aimed at mobile form  factors while the desktop processors will arrive in early 2015. Moving in 2015, Intel will have not one but two different desktop platforms, the Broadwell "Crescent Bay" platform which will make use of the Wild Cat point 9-Series chipset and the Skylake "Sky Bay" platform which will make use of the Sunrise point chipset.

Both platforms will seem to co-exist and platform details for Skylake have already been leaked out. The Intel Skylake platform will make use of a new x86 core architecture leveraging the IPC performance on a 14nm die node. Compared to Broadwell, which makes use of the Haswell architecture and a 14nm die shrink, the new architecture will deliver improved graphics in the form of GT4e and several chip enhancements such as cease usage of FVIR.

The successor to Skylake has been codenamed Cannonlake (previously known as Skymont), will feature a 10nm process die and the architecture of Skylake before it resulting in a more power efficient design. The Cannonlake platform will be known as Union Bay and would include the Union Point 200-Series chipset which will replace the Sunrise Point 100-Series chipset (Z170 on desktop platform). The same platform will be available on notebook and Ultrabook platforms. Little is known regarding Cannonlake at the moment and we might not even get to see it in action until IDF 2015 while launch is planned sometime in 2016. You can learn more regarding the Cannonlake 10 nm platform below: