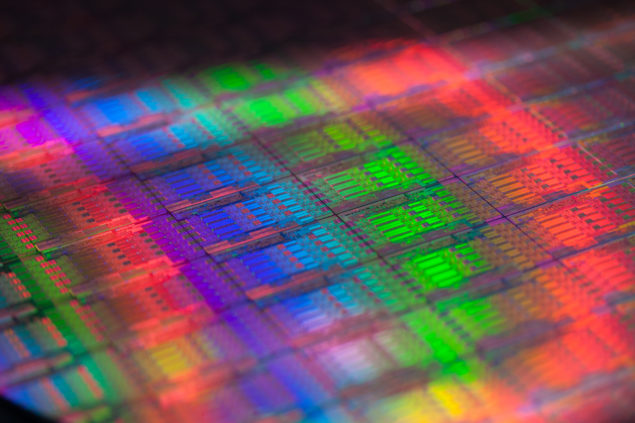 Today, Intel finally takes the lid off of their Haswell-EP lineup (Xeon E5-2600 V3) which replaces Ivy Bridge-EP (Xeon E5-2600 V2) from last year. Built on the latest Haswell microarchitecture, the Haswell-EP lineup ushers into a new era of high-performance computing on the server and workstation side with specifications and core performance improvements which are just amazing. 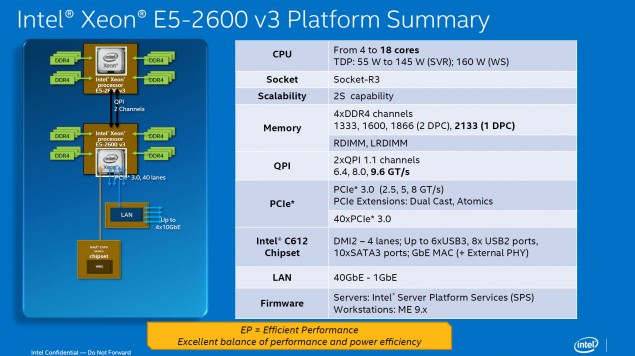 The HCC variants come in 4 columns with each column sharing a L3 cache module of 2.5 MB. The die shown is of the flagship Xeon E5-2699 V3 variant which has the first four columns equipped with 12 Cores (4 each) and 30 MB of L3 cache (10 each) while the last column has 6 cores and 15 MB of L3 cache which results in a total of 45 MB of L3 cache, 18 Cores, and two threads per core equating to 36 threads. The columns are connected to a PCI-e, QPI and DDR4 memory controller. The architecture is specifically optimized for non unified memory architecture workloads.

Intel's Haswell architecture also brings the latest AVX 2.0 (Advanced Vector Instructions 2.0) which doubles the theoretical FLOPS per clock on each core. Intel's AVX 2.0 allows the processors core to operate faster and adds more optimization from the Turbo Boost technology 2.0 revision featured on the Haswell-EP lineup. Everything from number of active cores, type of workload, power consumption, estimated current and CPU temperatures are taken into consideration when boosting the clock speeds of the Xeon E5-2600 V3 processors. The latest P state design allows each core to operate at its own independent voltages and clock speeds which improves CPU performance for different workloads since each core can be optimized for per core performance based on the task being put ahead. Another update is the QPI (Quick Path Interconnect) speeds which have been updated from 8.0 GT/s to 9.6 GT/s on Haswell-EP. Although some of the Haswell-EP processors still stick with the 8.0 GT/s speeds but the bulk of the lineup features the new standard which enhances bandwidth when using multi socket systems and boards. 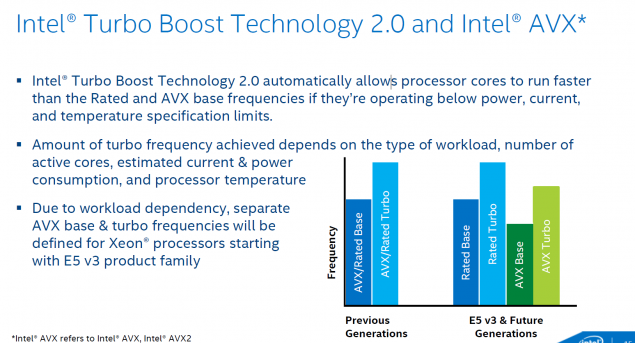 Following Haswell-EP is Broadwell-EP, Intel next-generation and first 14nm based Xeon processor series featuring their upcoming Broadwell architecture. Broadwell which according to Intel’s Tick-Tock roadmap is a Tick which means its essentially a die shrink (14nm) of Haswell featuring massive changes to the core design.

First of all, the Xeon E5-2600 V4 flagship processor would feature upto 18 cores and 36 threads on a single socket. That’s 72 threads running simultaneously on a dual socket enterprise setup and from the performance uplift chart , you can note that its going to be a complete and powerful package. Broadwell-EP will also be coupled with 45 MB of Cache (LLC) and will natively support DDR4-2400 MHz memory which is a decent upgrade over Haswell-EP but that puts the total improvement over DDR3 to about 25 percent which is great. 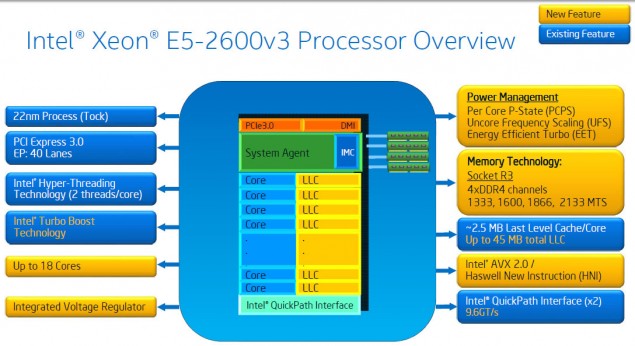 Another technology update over at the workstation front is the introduction of C612 series chipset and DDR4 memory. The Intel C612 series "Wellsburg" chipset is the updated refreshed of the C610 chipset which adds support for up to 10 SATA 3 (6 GB/s) ports, Discrete/Integrated/Hybrid clocking system, 8 USB 2.0/ 6 USB 3.0 ports, up to 8 PCI-e 2.0 (5 GT/s) lanes (x1/x2/x4), Intel vPRO, AMT, CUPs, MCTP firmware updates, Intel RSTe 4.0 RAID support. The chipset is designed for the 2S market while Haswell-EP processors can drive up to 40 PCI-e lanes (Gen 3.0) and include the latest Fortville network controller (Ethernet Controller XL710 10 GbE/40 GbE).

The DDR4 enhancements and support is another major feature which reduces the voltages while increasing the overall bandwidth of the systems. Intel's Xeon E5-2600 V3 platform can drive up to 384 GB of registered DDR4 and 768 GB of LRDIMMs (using 32 GB DRAM sticks) on 2S platforms but expect more capacity when the frame buffer on DDR4 ram increases to 64 - 128 GB per stick in the future. 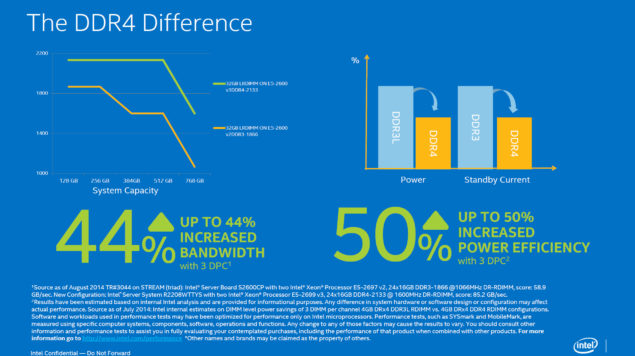 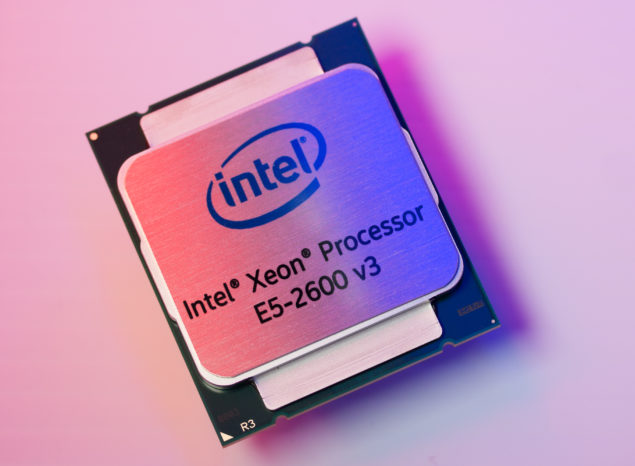