It has been a long time since Intel updated their Xeon line of processors but starting from Q3 2013, we would finally be looking at new Intel Xeon E5 and E7 families in the workstation and enterprisesectors as detail by VR-Zone. The launch shedules for Intel's upcoming desktop, mobile and server processors was also leaked a few days ago which can be seen here.

In Q3 2013 (July/August), Intel would launch their Grantely platform which would consist of the Ivy Bridge-EP based Xeon E5-2600 V2 lineup. The Intel Xeon E5-2600 V2 family would be enabled for 2 socket operations and feature upto 12 cores, 24 thread, 30 MB of L3 cache and quad-channel DDR3-1866 server memory support per socket. The faster clocked models would end up with a TDP of 130 - 115 W while the 10 core parts would carry a TDP of 70W. All chips would be compatible with the C600 series chipset on LGA 2011 socketed workstation boards. 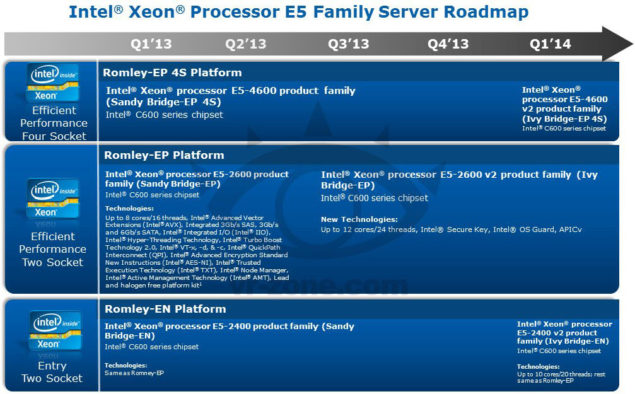 Intel is also preparing to replace their Westmere EX family with Ivy Bridge-EX in Q1 2014. The new Intel Xeon E7 8800/4800/2800 v2 family would fall under the high-end enterprise level Brickland platform that spans three generations of CPU architectures including Haswell-EX and Broadwell-EX as detailed here. The Intel Xeon E7-8800 v2 family would be enabled for 8 Socket and 8 socket plus solutions for enterprise market and would boast 15 cores with 30 threads. The Brickland platform would be based on the C600 Series chipset. The new EX Processors would also be able to support ECC DDR3-1600 and DDR4-2133/2400/3200 memory configurations along with a new version of Quick Path Interface upgraded to v1.1 for v1.0.

Intel is also planning to refresh their Xeon Phi family of Co-processors and would release two new SKUs based around the new stepping. Each model is similar in specs except that the 7120X comes without any cooling while the 7120P features a passive cooled design. Both models come with 1.238 GHz with the same 61 cores and 31 MB cache and have a 1.2 TFlops of double precision performance at hand. They sport a 8 GB memory that operates along a 512-bit interface and runs at 5500 MHz effective speed. TDP's for both parts are rated 300W.

Additionally, Intel would update their Xeon E3-1200 family with the new Haswell V3 processors in June, more on those here.