Solid state drives for the PCI-E interface have started to proliferate in popularity, even though they have yet to be targeted to those consumers that will actually be able to afford it on a larger scale. The largest processor manufacturer for desktops, laptops and server computers has just announced its SSD DC P3608 Series, and the best feature about them is that they have capacities as high as regular hard drives. 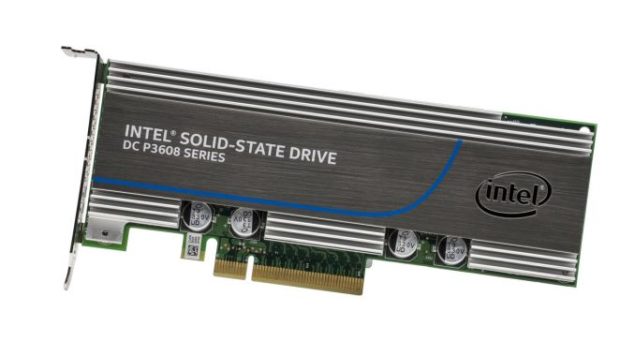 According to a source, the newly announced SSD DC P3608 Series take advantage of not one, but two NVMe drives which are controlled by a single PLX PCI-E switch chip. Due to actual speed limitations of different interfaces, users are going to have to change their storage mode to RAID-0 in order to witness the true performance of these SSDs. However, for those who are new to this, they should be warned that if their area is prone to power outages, then they might want to consider investing in a backup power supply unit.

This is because if a power outage occurs, then there is a very high chance of data loss when you are connected to RAID-0. Furthermore, since there are two NVMe drives controlled by a single chip, it might mean faster speeds but it will also increase idle power consumption to 11.5W. While this might not bother a majority of storage consumers, it would be a very good idea to have a proper airflow in the system’s chassis in order to prolong the lifespan of SSDs.

The highest capacity of Intel’s SSD DC P3608 is going to be a whopping 4TB and although the company did not divulge the pricing details of any of its capacity models, you can rest assure that you are going to be shelling out a lot of cash on this particular type of hardware. A table showing a complete specification list of the SSD DC P3608 Series is present below.

While 4TB is going to be highest capacity SSD to purchase, 1.6TB is going to be the smallest, followed by the 3.2TB version. Intel will most likely release pricing details in the next couple of weeks.