Intel will be launching its Skylake micro-architecture shortly. The paper launch is expected to be held at Gamescom 2015 with the products hitting the shelves within a month or so. One thing that will change from past lineups is that the Skylake-S "K-Series" unlocked multiplier CPUs will not ship with a stock HSF. Rather, taking a leaf out of the HEDT book, Intel expects end users to use their own third party solutions (while giving the option of its own dedicated solutions). 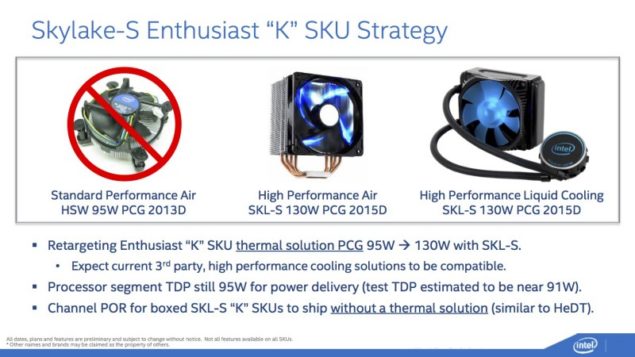 Intel SKL-S 'K-Series' processors to ship without a thermal solution, TDP of 95W

This isn't really a bad move on Intel's part since almost no overclocker would use the stock HSF (which is mostly useless as an overclocking solution anyways and barely adequate at stock clocks). I am personally using a Noctua NH-U14S and the difference between the stock HSF and my Noctua is night and day. Removing the HSF from all enthusiast class SKUs would allow Intel to cut costs without compromising on product quality - not to mention the average end user wouldn't have to pay for something they would never use anyways.

I have a feeling however, that the relative MSRP reduction due to lack of a complimentary HSF might not be equivalent to the cost reduction Intel achieves - allowing blue to broaden their profit margins for Skylake-S 'K-Series' SKUs (). Skylake-S will launch with the unlocked mulitplier processors, namely the Core i5 6600K and the Core i7 6700K. Both chips will be Quad core, with the later supporting Hyper Threading. The socket in question is the LGA 1151 socket with Intel’s Z170 Express chipset to allow CPU oveclocking. Both DDR3 and DDR4 will be supported making Skylake serve as the transition point between the two memory standards. Other SKUs (that will include the stock HSF) that are thought to be launched soon after include include i7-6700/6700T, Core i5-6600, 6500, 6400, 6600T, 6500T and 6400T, and H170, B150 chipsets and H110 chipset.