Intel is going to launch their Skylake-S mainstream desktop processor family on 1st September, 2015. The latest details come straight from GDM.OR.JP, who have confirmed that the Skylake-S lineup is going to be available at retail channels starting September, 2015 and will feature a total of 8 different SKUs which are mentioned in full details below. 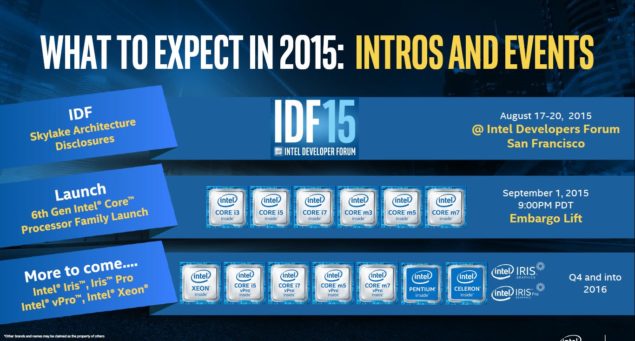 While Intel initially kicked off the Skylake family with two processors, the Core i7-6700K and Core i5-6600K that are part of the Skylake-K (Unlocked CPU) lineup, the rest of the lineup will remain under wraps till they officially launch on 1st of September. The Skylake-S lineup is made up of 10 total SKUs, two of which have already been launched in the market and are the only unlocked chips in the lineup. The remaining 8 chips feature four 65W (locked) processors and four 35W low TDP chips. These processors will be compatible with the LGA 1151 socket powered Z170, H170 and B150 chipset based motherboards. Featuring full support for DDR4 memory and next generation storage devices, the Skylake-S platform will deliver improved performance and energy efficiency as compared to the Haswell generation of processors. The chips featured in the Skylake-S lineup are listed down below:

Intel will also have a Core i3-6100 processor and Pentium G4400 processor at the launch event but their availability is unknown at the moment. The details of the Core i3-6100 include a dual core (multi-threaded) design with 4 MB of L3 cache and GT2 graphics chip clocked up to 1000 MHz. The Pentium G4400 will be a dual core design without multi-threading and feature 3 MB of L3 cache. The clock will be maintained at 3.3 GHz with turbo boost frequency and will come with the HD 510 (GT1) graphics chip with a maximum clock speed of 1050 MHz. Both chips will feature a TDP of 65W.

Apart from the Skylake-S platform, Intel will also be introducing their mobility based lineups that include the Skylake-U, Skylake-H, Skylake-H Xeon and Skylake-Y families in the coming months. The 6th generation mobile platforms will be the first solutions to bring DDR4 memory on laptops and notebooks. We will have more info on these processors in the coming days so stay tuned. Those who want to see the architectural enhancements featured on Skylake could head over to our technical analysis over here.