The latest Intel Skylake Core i7-6700K review has already been published by PCOnline, showcasing the overall performance improvement over Haswell, Haswell Refresh and Haswell-E generation of processors. There have already been several Core i7-6700K versus Core i7-4790K comparisons which we have seen previously but the latest performance review pits Intel's latest mainstream core against the Haswell-E Core i7-5820K CPU to show some interesting results.

The Intel Core i7-6700K is the flagship 14nm processor of the Skylake-S desktop lineup. Its in fact the first of the two processors which will be launched on 5th August by Intel at Gamescom to kickstart the Skylake lineup and the Z170 chipset based motherboards. Starting off with the flagship Core i7-6700K CPU, we are looking at a quad core design with eight threads which shows a multi-threaded design. The chip features 8 MB of L3 cache and has clock speeds maintained at 4.0 GHz base and 4.2 GHz boost clock. The chip can support DDR4 2133 MHz memory and DDR3L 1600 MHz memory. The processor features the HD 530  graphics chip, clocked at 300 MHz base and 1150 MHz boost and full support for DirectX 12 API. 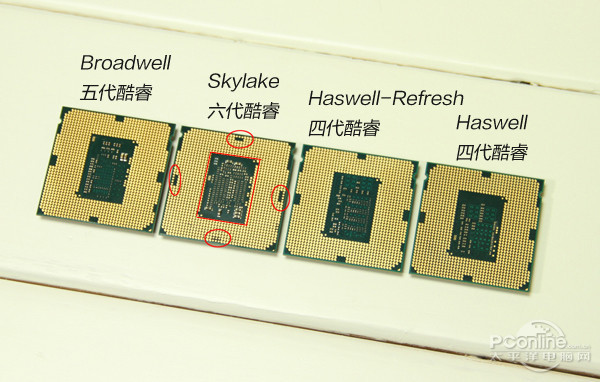 The source was able to test the Devil's Canyon and Skylake processors with their respective Z97 and Z170 motherboards. Both platforms were equipped with 8 GB of memory (DDR4 with Core i7-6700K and DDR3 with Core i7-4790K) while the Core i7-5820K was equipped with 16 GB of DDR4 memory on the X99 motherboard. For discrete graphics performance testing, a GeForce GTX 980 Ti graphics card was used along with a 1000W power supply. The platform used was Windows 7 so the performance gains with Windows 10 and Skylake will be far better in terms of what we get to see in the benchmarks today.

The benchmarks performed show slight gains in CPU performance but some decent performance increases with discrete graphics cards in gaming. Coupled with a new CPU architecture, it was believed that Skylake will be an incremental gain in terms of performance by the actual IPC improvements lie in between 10-15% while Broadwell pushed for 5.5% IPC growth over Haswell Refresh. With DDR4 memory and next generation platform optimizations, we will see some decent gains but nothing incremental over Haswell. Overclocking performance on the other hand will see a major lift with 5.2 GHz being an easy job on air cooling. The chip will not get as hot as Haswell either due to the exclusion on FIVR units from the CPU die. This will grab the attention of several overclockers. Gaming performance shows the performance of Core i7-6700K being better than the six core Core i7-5820K. Since DirectX 12 leverages per core and multi-core performance, we can see even higher gains in gaming. The Core i7-6700K Skylake officially launches on Wednesday, next week, so stay tuned for more information.