It looks like Intel is gearing up for quite an impressive reveal in 2016 (at CES?). In the first quarter of 2016, the blue-chip giant is going to be showing off an enthusiast platform dubbed ‘Skull Canyon’. It’s being tagged as the “most powerful NUC yet” and features the latest Skylake architecture combined with the elusive Gen9 GT4e graphics: namely the Iris Pro 580 with 128MB of stacked eDRAM. Not much details are known at this point but the following teasing image was found in Intel documentation (via FanlessTech): 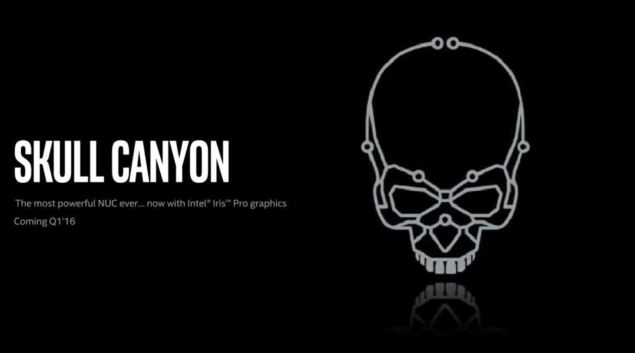 Intel teases 'Skull Canyon', the most powerful NUC yet

Intel's Next Unit of Compute or NUC for short is, as most enthusiasts know, a very tiny form factor all-in-one PC - usually with a not-so-tiny price tag. The applications of these little powerhouses are diverse and can include anything from being the brain of a robotics project to high performance distributed computing. They can also act as the ultimate small form factor HTPC that can easily be hidden out of sight. While the compute or CPU portion of things was reasonably powered, the lack of a powerful iGPU posed quite an interesting quandary for more graphically intensive applications. With the inclusion of the Iris Pro 580 graphics in Skull Canyon however, things (for the flagship model atleast) are about to change.

The Intel GT4e Iris Pro graphics are a Generation9 core that ship with select Skylake parts. The ‘e’ at the end refers to eDRAM which the Iris Pro 580 has around 128MB of. The eDRAM acts as a fast L4 cache and facilitates the 72 Execution Units (EUs) present on the die. The core clock of the chip was 1 Ghz according to Intel’s marketing material, but this could change in the closed thermal envelop of the NUC. The chip is rated at a resounding 1152 GFlops of Single Precision or 1.15 TFlops. To put this into perspective, this is slightly above the Maxwell 1.0 debut graphic card: the Geforce GTX 750. While this is nowhere near the amount of horsepower a high end dedicated graphic card can pull, this is roughly double of what AMD’s Godavari chip can output. The performance of the Iris Pro 580 in Skull Canyon however, should be just enough to run modern titles at playable frame rates (low to medium settings, 1080p).

Skull Canyon should see Intel's Skylake-U series replace the Broadwell-U series processors in Intel's NUC lineup, which currently has the Core i7-5500U as the flagship part. The standing lineup will has the Core i7-6500U, Core i5-6200U, Core i3-6100U, Core i7-6600U, Core i5-6300U. All of the processors are dual core models and specifications are not know at the moment in regards to clocks speeds, TDPs and graphics unit but the Core i7-6600U is the flagship part of this lineup which are aimed at the main stream notebook devices. The current Broadwell flagship NUC is the NUC5i7RYH with an i7-5557U processor, dual-channel 1.35V DDR3L SODIMMs (1333/1600/1866 MHz, up to 16GB) one mini HDMI 1.4a, one mini DisplayPort 1.2 and four USB 3.0 ports (one charging capable). All of this, is provided at just 28W TDP.