Intel is giving us slightly more information and a first look at its next-generation Tiger Lake mobile CPU this week at HotChips 32. The company already presented its Tiger Lake processor last week with a very high-level overview of the 11th Generation mobility lineup which you can check out over here.

Intel Shows off 11th Gen Tiger Lake CPU Dies, Gives Us A Detailed Look at Everything New With Its Next-Gen Mobility Processors 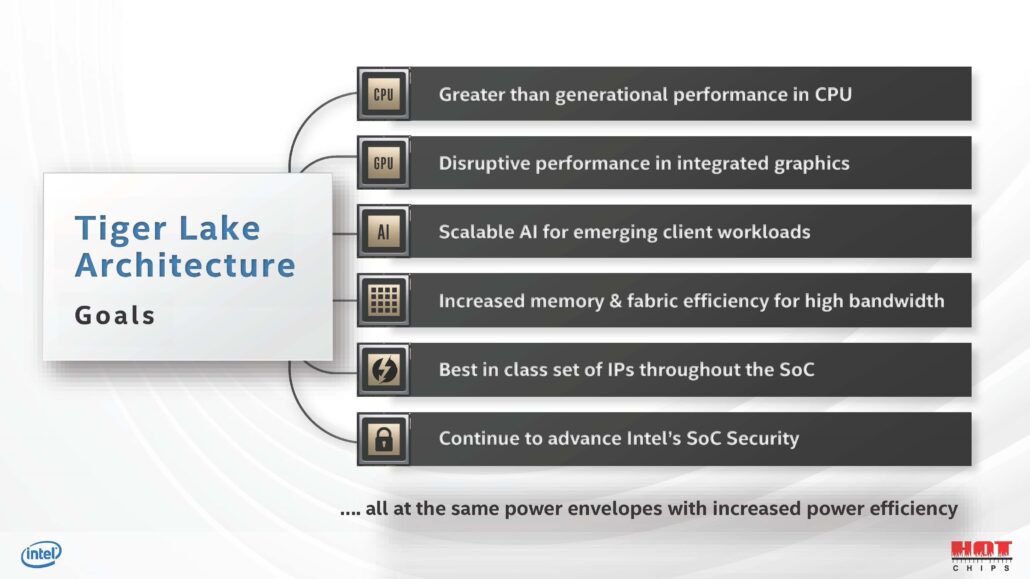 The 10nm++ process node is being termed by Intel as the 10nm SuperFin transistor design. Intel itself claims that the SuperFin process delivers the same uplift in performance as a proper node shrink. Intel stated that it had achieved around 17-18% performance uplift over the standard 10nm process node featured on 10th Generation Ice Lake chips while delivering much faster frequencies. You can read our full article detailing the Intel SUPERFin transistor technology over here. 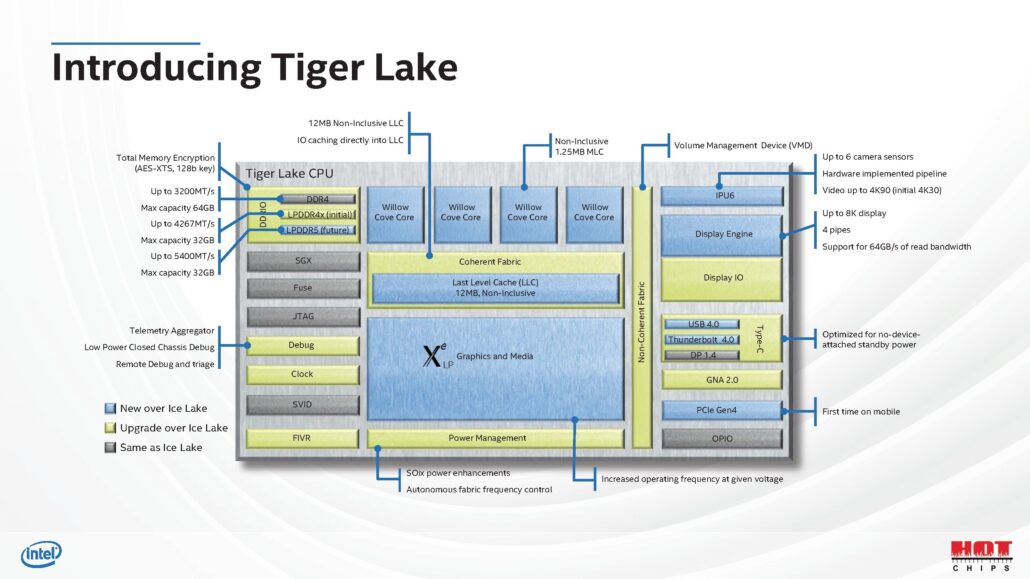 The Intel Tiger Lake CPUs will use a dual-ring interconnect. The Tiger Lake-U CPU lineup is going to feature up to 4 Willow Cove cores and a Xe-LP integrated GPU engine with 96 EUs or 768 cores in total, running at a frequency of around 1300 MHz. The Tiger Lake CPUs themselves are expected to achieve short burst frequencies of up to 5 GHz which is impressive for its 10nm++ process node.

The Tiger Lake-U family would consist of 15-28W TDP CPUs and would feature 4 cores and 8 threads, albeit at much higher clock speeds with boost nearing 4.50 GHz. These CPUs would also feature GT2 tier, Gen 12 Xe GPUs, and would come in the UP3 (BGA 1499) package. Tiger Lake-U will be the first to hit notebooks on 2nd September as reported earlier.

The documents from the manufacturer mention LPDDR5 support for the said family whereas the rest of the lineup will use either LPDDR4(X) memory. We have seen laptops with LPDDR4 and LPDDR4X memory featured alongside the Tiger Lake-U CPUs so we can expect multiple configurations with few higher-end & the more expensive variants offering LPDDR5 support.

Then there's the high-performance Tiger Lake-H lineup that would consist of up to 8 core and 16 thread chips based on the new Willow Cove architecture. The CPUs would carry up to 34 MB of cache that's 24 MB L3 (3 MB L3 per core) and 10 MB L2 (1.25 MB per core). Tiger Lake CPUs will come with an asymmetrical 48/32 KB L1 cache and will fully support AVX2 & AVX-512 instructions. Tiger Lake-H CPUs would additionally feature Two-Level Memory (2LM) and SGX (Software Guard Extensions). Intel's Tiger Lake-H family would support DDR4 speeds up to 3200 MHz.

The 10nm Tiger Lake CPUs would tackle AMD's 7nm Zen 2 based Ryzen 4000 'Renoir' family when they are officially launched on the 2nd of September.