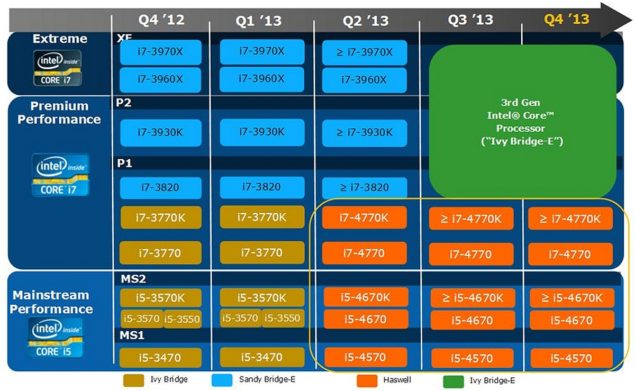 Intel's Ivy Bridge-E has been confirmed to launch in Q3 2013, a few months after the launch of its 4th generation Haswell core as indicated by chipzilla's 2013 leaked roadmap. According to the roadmap, Intel plans to bring fast Sandy Bridge-E CPUs in Q2 2013 along with Haswell desktop processors and Ivy Bridge-E in Q3 2013.

The roadmap shows that Intel would launch CPUs for its Ivy Bridge-E HEDT platform throughout Q3 and Q4 2013. The chips would remain compatible with the Socket LGA 2011 and X79 chipset, feature huge amounts of L3 Cache and around 6-12 cores (Ivy Bridge-E/EP). The TDP would be set around the same level as Sandy Bridge-E though clock speeds and specifications would be better due to 22nm Tri Gate architecture. The CPUs would feature Quad Channel memory controllers and can support 8 GB of DDR3-1066/1333/1600/1866 per DIMM slot. PCI-express 3.0 would also be supported by the new processors churning out 40 lanes and four lanes for PCI-e 2.0.

It is believed that four CPUs would launch under the Core i7-4900 branding as revealed earlier:

Until does not only have the 22nm Ivy Bridge-E planned for its HEDT platform. The company would also give an update to its current Sandy Bridge-E lineup as the recently launched Core i7-3970X (higher clocked 3960X) isn't enough for consumers. We are looking at faster variants of the Core i7-3930K, Core i7-3820 and a new Extreme Edition processor built to replace the Core i7-3970X. However this time, Intel plans to change the game with the launch of its first 8 Core consumer CPU - Core i7-3980X.

The 3980X was thought to be completely axed after the launch of 3970X. However the recent leak from ARCTIC cooling and the new roadmap details aim to show that the launch remains a high possibility.

Additionally, the 2013 Intel Roadmap shows Haswell Core i7 and Core i5 in Q2 2013 (June to be precise). But also shows faster variants to the Haswell 'K' series lineup during the end of 2013. The Haswell Core i3 series arrives in Q3 2013 along with Haswell based Pentium processors. Haswell comes with compatibility support for LGA 1150 socket and 8-Series Lynx Point chipset. The Z87 and H87 chipset boards debut in Q2 2013 while the highly trimed H81 launches in Q4 2013. 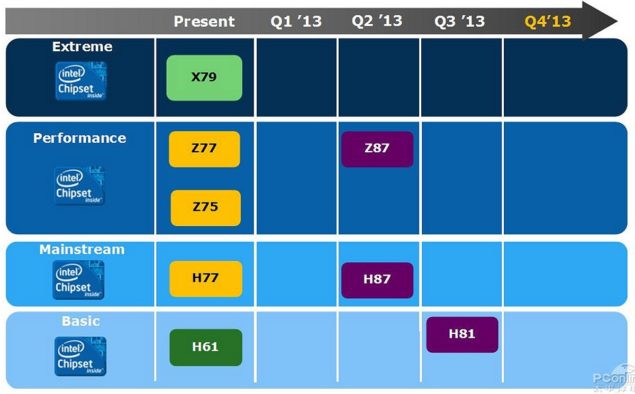