In what appears to be an obvious replication of the madly successful Core branding, Intel has implemented a new branding system for the Atom series. Using an exceedingly simple nomenclature, the Core X3, Core X5 and Core X7 are going to comprise the mainstream part. Needless to say the Core X3 series of Atom processors will form the lower end of the lineup, with X5 as the middle end and X7 as the higher end. 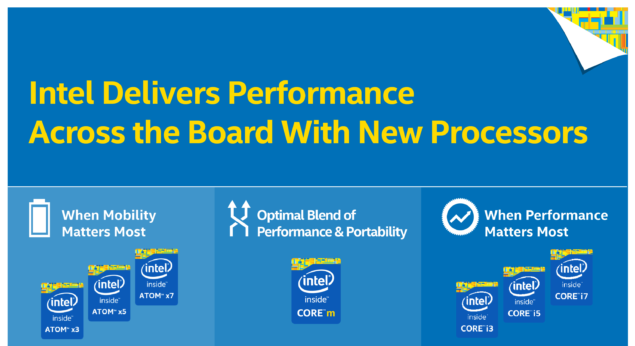 We are going to be covering the series in much more detail with a followup post compliant to our NDA with Intel. I must admit I am really happy with Intel's new nomenclature, its simple, elegant and gets the job done surprisingly well. Not only will Intel be able to better position its Atom chips in the market but it has now successfully differentiated them from the Intel Core M series, which usually caused confusion for beginners before.

The Atom x7 will feature more cores, higher clocks and generally a larger feature set similar to the i7, while the x5s will be watered down versions and x3s providing just basic functionality. The secret behind the success of the Intel Core lineup was yield naturally, with the failed i7 chips having the defunct cores lasered off and becoming i3s. I imagine something similar is in store for this lineup. It goes without saying that nothing in the physical aspect of production will change, just how consumers receive it. Intel is going to be launching Broadwell based atom platform very soon and most probably will be powered by Intel's Airmont architecture and maybe even Sofia.

Basically, the Atom lineup will consist of 22nm and 14nm parts which will be detailed in our upcoming post. Since the platform is mostly mobility, its logical to expect mobile based SoCs including connectivity tech such as LTE. The new Intel Atom x3, x5 and x7 processors will be aimed at tablets, phablets and phones and prioritize mobility and battery life, while offering competitive battery life. The Intel Core M and Core i series remain to target laptops and hybrid devices.