Just yesterday we released a hint found in IDF14 slides that Skylake will feature Dual-IMC tech and while that is unconfirmed, it seems that Intel is pursuing a 'Universal DIMM' slot design for notebooks that will be able to accommodate both DDR3 and DDR4 Memory. Universal compatibility like this is always an appreciable gesture and helps the Industry grow at its own pace, rather than forcing it to jump. 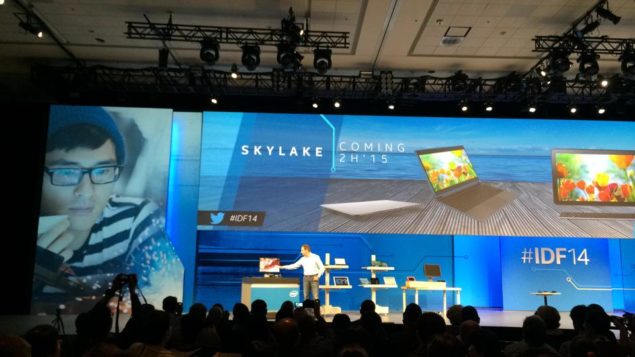 So far DDR4 support exists only within the Haswell-E, HEDT platform. However, with this new UniDIMM memory standard, users of the mobile platform will be able to enjoy both DDR3 and DDR4 Memory on the same slot. Prominent AIBs such as Kingston, Micron and many more are fully supporting this initiative. The specs of the standard are as follows:

This upgrade to the current SO-DIMM standard will make the notebook market more user friendly and also help drive the sector that most Investor's care about. Interestingly we have seen motherboards in the past which supported both DDR2 and DDR3 but that was by utilizing multiple RAM slots. The UniDIMM standard will only have one slot for both generations. Currently DDR4 is very expensive but as time passes it will grow cheaper, infact there will come a time when DDR4 is actually cheaper than DDR3!

This would allow OEMs using the UniDIMM to ship notebooks with DDR3 memory and apply a 'DDR4-Ready' (and a premium ofcourse) tag to the product allowing customers to upgrade it later. This standard raises interesting questions on what Intel can achieve when it puts its mind to it. If such a standard can be introduced on the mobile platform then it most certainly can be introduced on Desktop as well. And perhaps this is where the Skylake-S Dual-IMC leak comes in. On a closing note, I would be interested to see if you can mix DDR3 and DDR4 RAMs together in this slot.