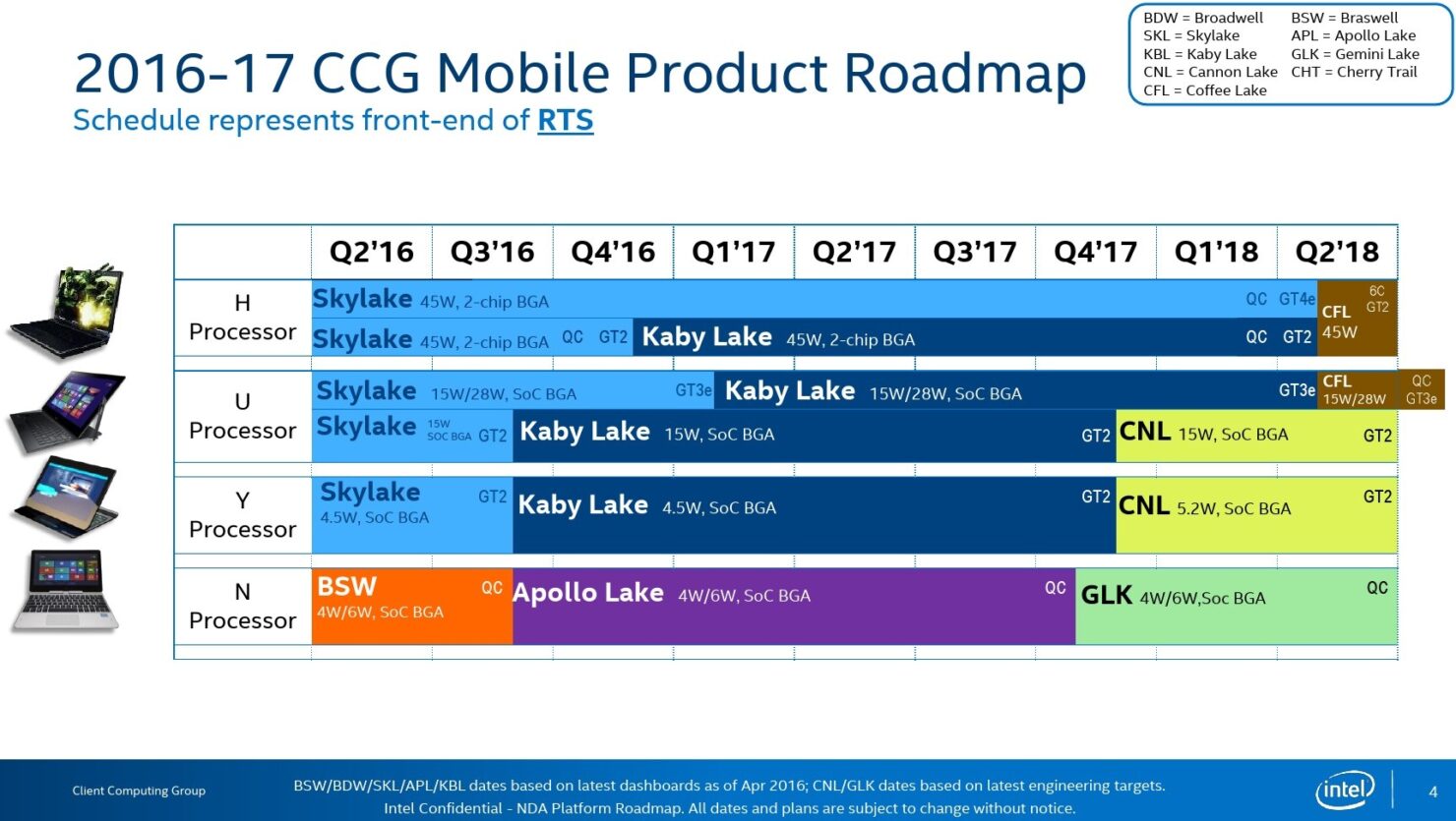 Intel has decided to cancel the KBL-H platform citing a lack of demand and will only be pushing forward with KBL-R which stands for Kaby Lake Refresh. The KBL-H platform was going to be the 18-W, 4+2 platform (where the 4 stands for cores and 2 stands for GT2e graphics) but one that will no longer be seeing the light of day. According to the leaked roadmap by Benchlife.info, it looks like the 10nm based Coffe Lake is still on track for 2018 along with all its sub-platforms.

The key message by Intel sent out to channel partners cites that the 18W processor has been canceled because: 'interest is shifting to KBL-R'. Of course, what that actually translates into is that there is very little demand for KBL-H, considering its basically a repetition of the same 14nm process that has been here since Broadwell. Also with Ryzen on the way, Intel needs to shift its focus to its competition or risk losing its market position. It needs to be all hands on deck for blue, or it is going to be rough sailing.

It's good to see however that Coffee Lake remains firmly on track and set for a 2018 release. While there have been rumblings that the 10nm process ran into trouble, this makes it clear that as of yet, these problems haven't been large enough to cause a slowdown of schedule. The Coffee Lake platform is also going to be the first one with a 6 Core CPU introduced into the mainstream market. Although the entire paradigm of Intel pricing is probably going to change with the arrival of Ryzen.

All in all, it's going to be a tough year for Intel because unlike AMD, the former is huge and less steerable as a company. It will need to respond to Ryzen by slashing prices and this is going to eat into the company's margins. If they chose not to do it and instead take the 'NVIDIA path' where they claim to offer a superior product for a premium, this can backfire horribly and end up costing Intel its secure position in the industry. The reason? the Ryzen 8 core processor we saw is just the tip of the iceberg, if you remember there are other Zeppelin based CPUs inbound scaling all the way up to 32 cores, while they are not part of the mainstream spectrum the strain on Intel's product offerings will clearly show in the mainstream side of things as well.

Kaby Lake is Intel's 7th Generation of processors of this particular iteration of x86 and Coffee Lake is going to constitute the 8th Generation of Processors. CFL will be the first node shrink since the arrival of Broadwell and will only be pushed out on time if 10nm yields are on track. If they aren't, we can expect Kaby Lake refresh to last longer than expected and only the mobility variants of CFL arriving near the end of 2018. With this, they will be able to keep up the pretense of a functioning Moore's Law (or their latest definition of it anyways) even if they are facing bad yields.