The latest roadmap for Intel's upcoming desktop based Kaby Lake processors has been leaked by Benchlife. The roadmap indicates that Kaby Lake desktop processor family known as Kaby Lake-S would be available in Q4 '16 along with the latest 200-series chipset based motherboards. The new processors will be part of the third Intel family to utilize the 14nm process architecture which would be optimized for better performance and efficiency.

Intel's Kaby Lake processors have been announced for a while now and have faced delays due to restructuring that occurred recently at Intel. Previously, the desktop parts were expected for Q3 2016 but have since been moved back to Q4 2016. The roadmap gives us details of when to expect retail availability of the processors in the market.

Engineering samples of the Kaby Lake processors were manufactured in April 2016 so it means that we are expected to see some leaks pretty soon. We already got to see some details of the Core i7-7700K and Core i5-7500U processors a while back. The retail chips will be available in two variants, the Kaby Lake-S 4+2 and Kaby Lake-S 2+2 series. The first one represents the Quad core products with GT2 graphics and the second one represents the Dual core products, also with the GT2 graphics. 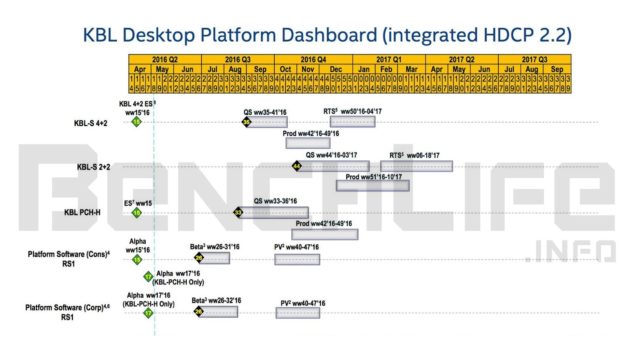 The Kaby Lake-S 4+2 series is expected to hit qualification sampling in September 2016 followed by mass production in November 2016 and retail availability in December of 2016. The Kaby Lake-S 2+2 family will hit qualification sampling in either November or December of 2016. The dual core desktop chips which include Core i3 and Pentium series usually arrive late to desktop platforms. Mass production on these processors will start in late Q4 2016 or early Q1 2017 followed by availability in February or March 2017.

The Kaby Lake 200-Series PCH (Platform Control Hub) will also hit qualification sampling in mid Q3 2016 and hit mass production in early October 2016. Overall, we can expect the availability of the entire Kaby Lake desktop family in late Q4 2016 which aligns it against the AMD Zen (AM4) family of enthusiast processors. Both Intel and AMD will tackle it out with their new 14nm processors in the consumer market.

Here's What To Expect From Kaby Lake Desktop Processors

Intel Kaby Lake processors in general would be getting increased core performance (expect the usual 5-10% improvement) unless Intel plans to do something very different with Kaby Lake which seems highly unlikely. The processors will retain the basic features such for enthusiasts such as enhanced full range BCLK overclocking and 95W “Unlocked” options to choose from. The unlocked family will be available later in Q2 2017 and would be known as the Kaby Lake-X series.

While Intel has increased the core count on their enthusiast chip platform (Broadwell-E), things will remain the same on their mainstream platform with both dual and quad core (35W and 65W options) available to consumers along with the enthusiast quad core options. Other key features on the media and display side include 5K (30Hz) on one display and 5K (60Hz) dual display capabilities, HEVC 10-bit hardware decode, VP9 10-bit (hardware), UDH/4K display resolutions and support for Intel’s Thunderbolt gen3 support.

The Intel 200-Series PCH is a crucial update for the upcoming family of processors as it will allow support for them. The Intel 200-series PCH will include several SKUs such as Z270, H270, Q270, Q250 and B250. While the new chipset doesn't include any major changes over the Skylake PCH, it does include support for Intel Optane technology which utilizes Intel's 3D XPoint memory to deliver high-performance SSDs and memory solutions. 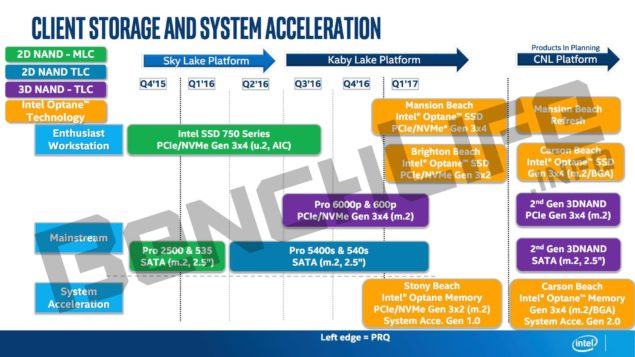 These processors will be supported by the current LGA 1151 socket which will allow support for both Kaby Lake-X and Kaby Lake-S processors. Motherboard manufacturers already had prototypes based on the Z270 chipset on display at Computex 2016 which shows their level of readiness for Intel's new desktop family. Expect to hear more about Intel's 7th generation platform in the upcoming months.