Intel recently demoed their brand new Speed Shift technology, which completely revamps the older frequency control known as SpeedStep that we all know (and love?). The new tech is supposed to make the processor respond much quicker to performance burst requests as well as improving the effectiveness and efficiency of the performance bursts themselves. It does this by handing some extent of the frequency control back to the processor – which, in conjunction with the OS (which needs to allow it to take over control of P-States) can perform much better. It is because of this that the new tech is limited to computers with Windows 10 (the functionality is delivered via an update (in November) to computers housing Intel’s Skylake processors). 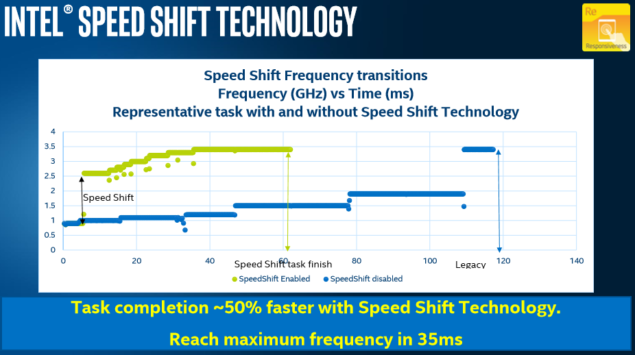 An official slide showcasing the performance gains which can result from Speed Shift. @Intel Public Domain

Usually, the average Intel based PC works on Intel’s Speed Step technology which works on P-states, which is a performance state that the operating system can request from the processor. The processor usually responds to the request by adjusting its frequency and voltage levels to the point specified in the P-state at the start of the workload. Naturally, in situations where the thermal envelope and electric consumption is constrained (and even in situations where it is not) it is not efficient to run the processor continuously at high clocks, so the OS usually request a lower P-state.

Intel describes the tech as: 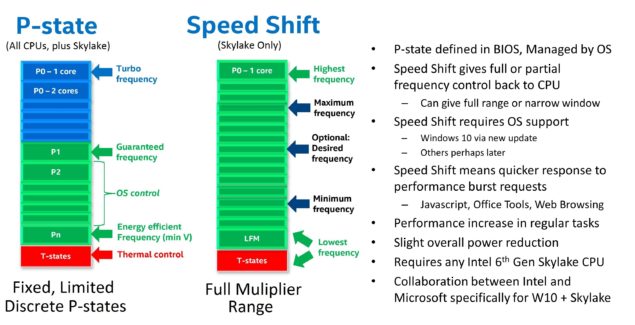 So what exactly is the difference between Speed Step and Speed Shit? One of the major differences is that in Speed Step, the OS was the one primarily handling the P-state requests, while in Speed Shift, the control will be handed back to the CPU which will result in exponentially more responsiveness.  Lets talk numbers. When talking about responsiveness to performance requests, the CPU typically takes around 20-30ms to respond, with the new Speed Shift technology, this time will be reduced to around 1ms – which is an absolutely huge gain needless to say. The time it takes to go to maximum performance state is reduced by around 33% from 100ms to 35ms.

Skylake didn't manage to deliver solid IPC gains - something that is to be expected owing to the slowing process improvements but Intel made up for that - and more by small architectural and software improvement across the board. While this improvement won't really net gains noticeable to the general user, they will net in small improvements in various workloads. These include workload types which require continuous changes in the P-State. The release date for the patch is sometime this month and Skylake owners (currently on SpeedStep) will get access to the brand new technology via a Windows 10 update - it is expected that other operating systems in the future will be able to support it as well.

Anandtech did an investigative piece (here) on Speed Shift and performed several benchmarks. A few are given below and I would recommend giving their writeup a read.