Intel has just launched their Ivy Bridge-EX Xeon E7 V2 lineup for high-performance servers and are now aiming to prepare their next generation of Haswell-EP processors. The Haswell-EP Xeon E5 V3 processors would launch the current year featuring new enhancements and feature the 22nm Haswell microarchitecture. 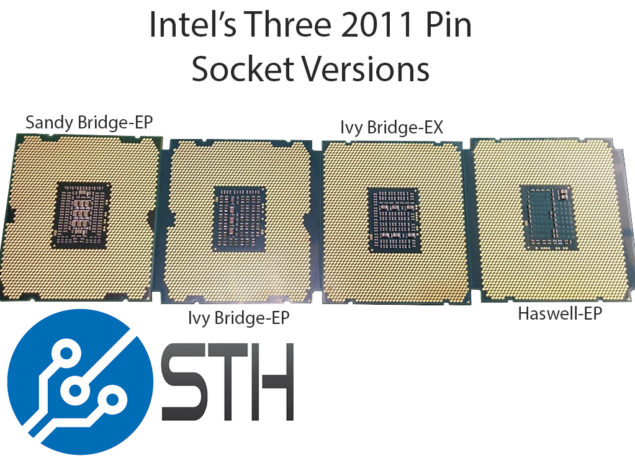 We have some new information regarding the upcoming Haswell-EP processors straight from the folks over at ServerTheHome who managed to get their hands on the first few samples of the Xeon E5 V3 CPU. From the looks of it, Intel would be releasing a third LGA2011 socket type for compatibility with the Haswell-EP generation of chips. Currently, Intel has two LGA2011 socket types which include the original LGA2011 socket which supports Sandy Bridge-EP and Ivy Bridge-EP. The second type which is known as the Socket FCLGA2011 was released with the Ivy Bridge-EX series. The same socket type is mentioned for the Ivy Bridge-EP chips but it isn't compatible with the Xeon E7 V2 chips.

Intel is planning to introduce their third LGA2011 socket type known as the LGA2011-3 which will debut along with the Haswell-E and Haswell-EP generation of microprocessor families. This has been known since a while and the socket change was expected considering the new features such as DDR4 memory supported by the platform. The source also managed to take some comparison pictures of the Haswell-EP processor with Ivy Bridge-EX, Ivy Bridge-EP and Sandy Bridge-EP and gathered some interesting details:

For their next-generation series, Intel is going to release the Haswell-EP generation of Xeon processors branded as the Xeon E5-2600 V3 which from an architecture perspective are a TOCK featuring the latest 4th generation Haswell microarchitecture. Based on a 22nm 3D Transistors process, the Xeon E5-2600 V3 family would support upto 14 cores per socket and 28 threads coupled with fast 35 MB LLC (Last Level Cache) and featuring both the Intel Hyper Threading and Turbo Boost technologies.

The new Haswell architecture would further leverage the performance over the existing Ivy Bridge architecture based Xeon family delivering more performance with improved efficiency which is the key role of effectiveness in the enterprise and workstation scape. Just like Ivy Bridge-EP before it, we will get multiple die variants of Xeon E5 2600 v3 family which will only be detailed once they launch next year.

Haswell-EP will be Intel’s first native platform to feature DDR4 memory support with speeds of 2133 MHz which will provide significant boost in bandwidth when compared to conventional DDR3-1866 MHz memory. Intel will also topple these chips with 40 PCI-Express Gen 3 lanes and we are looking at TDPs ranging between 70W to 145 Watts while the high-performance workstation parts will feature a TDP of 160W.

Following Haswell-EP is Broadwell-EP, Intel next-generation and first 14nm based Xeon processor series featuring their upcoming Broadwell architecture. Broadwell which according to Intel’s Tick-Tock roadmap is a Tick which means its essentially a die shrink (14nm) of Haswell featuring massive changes to the core design.

First of all, the Xeon E5-2600 V4 flagship processor would feature upto 18 cores and 36 threads on a single socket. That’s 72 threads running simultaneously on a dual socket enterprise setup and from the performance uplift chart , you can note that its going to be a complete and powerful package. Broadwell-EP will also be coupled with 45 MB of Cache (LLC) and will natively support DDR4-2400 MHz memory which is a decent upgrade over Haswell-EP but that puts the total improvement over DDR3 to about 25 percent which is great. TDPs are expected to remain the same as Haswell-EP for each part but take it as an improvement since a Broadwell-EP with 18 cores would be featuring a 160W TDP which is the same as a 14 Core Haswell-EP variant.

On the clock frequency side, we aren’t looking at the 18 or 14 core chips to be clocked high from 3 to 3.3 GHz but the 10-12 core variants have the probability of featuring speeds as high as 4 GHz with lower TDPs.