We received confirmation just moments ago that Intel has confirmed its plans for Haswell-E. The details are very flimsy at the moment but we have some solid information on Intel's plan for the High End Processors. 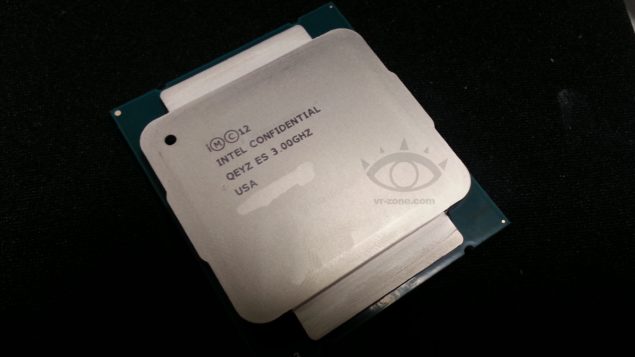 An image of Haswell-E Engineering Sample courtesy of VR-Zone.com

First and foremost Intel will be launching its new X99 Chipset to compliment its new Haswell-E series, which according to our sources will be priced around $999 (Flagship SKU). You would be happy to hear that Haswell-E will integrate full support for DDR4 Memory with native frequency of 2133 MHz.

The Haswell-E will succeed the Ivy Bridge-E series of the high end spectrum of Intel's Processors and will be split into 'K' and 'X' divisions. The Extreme Edition variant denoted by the 'X' is the flagship SKU boasting 8 cores while the remaining processors would feature 6 cores depending on the model. The X99 series Chipset will feature USB 3.0 support and upto ten 6GB/s SATA Ports.

Haswell-E will use the latest 3D Transistor technology based on a 22nm fabrication process and will of course support Hyper Threading, Turbo Boost 2.0 and PCI-E 3.0.  According to our sources Intel's high end spectrum will be unveiled at the Computex 2014 in June and our sources reveal that the Ivy Bridge-E and Haswell Counterpart will only account for 5% of Intel's shipment world wide which is justified for a platform aimed towards enthusiasts and extreme PC builders. The X99 Chipset will start shipping in April 2014 to manufacturer's.  That's about all the information we have at the moment.

We will suppose that Intel brands their Haswell-E processors as the Core i7-5*** series in which case the X series would be denoted as Core i7-5960X and K series part would be called the Core i7-5930K. These aren’t confirmed names but Intel has kept this style of series branding for a while and we suspect they will continue the trend with their Haswell-E and Broadwell generation of processors uptill 2015.