Intel Haswell ‘Celeron’ SKUs Out Next Month, G1820 and G1830 Already Available For Sale Ahead of Schedule

The Haswell 'Celeron' Processors were slated for launch in Q1 2014, but it seems Intel has pushed the series out ahead of schedule. Two Celeron SKUs with Haswell Architecture are already available for purchase while the rest will be available next month. 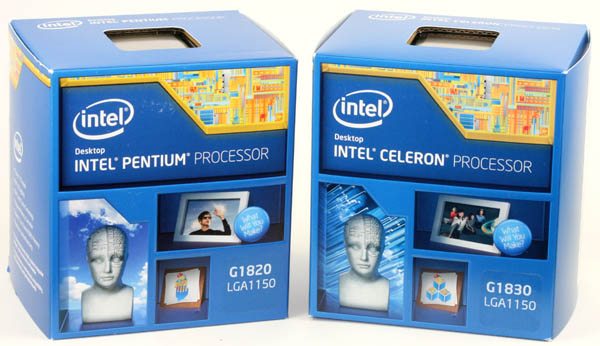 The Celeron G1820 and Celeron G1830 are already available at various online retailers including third party sellers at Amazon.com. The two ''leaked'' SKUs and the rest of the Celeron lineup will be available in its entirety from next month. Here is the table containing the specs and known prices of the SKUs.

The Celeron series is basically a strict budget value series and the Haswell refresh of the same is no exception. With processors starting as cheap as $42, budget gamers can benefit from the latest rchitecture while keeping costs to a bare minimum. That said current games are very rarely CPU intensive (with Crysis 3 being an obvious exception) so if you skimp on the CPU to upgrade later, it is probably a wise choice. The GPU on the other hand is an other matter entirely.  The processors have the same integrated HD graphics, clocked at 1050 MHz, and come with on-chip memory controller, that supports memory up to DDR3-1333.

The downside to these processors is that they incorporate only basic instruction sets, such as Intel 64 and SIMD instructions up to SSE4 (No 4.1/AVX and above). They do however support virtualization technology. The Haswell Celerons will require the 1150 LGA Socket.  But how much better is this refresh from Ivy Bridge? The answer is a maximum of 10%, a minimum of 1% and an average of 6%. We also have reports that the 1820T will only ship in OEM computers and wont go retail.

#Intel Celerons with #Haswell Architecture out next month. 2 SKUs are already available if you know where to get them.http://t.co/18UIUiGN1e