The past week has seen quite a number of leaks, at east where the Intel Processor department is concerned, and as the month draws to an end we have learned almost all there is to know about Intel's new built-for-overclocking SKUs. Our colleagues over at Chinese VR Zone have sent us the final specifications of the Devil Canyon processors as well as the Pentium 20th Anniversary G3258 processor.

The screen shots are of course taken via the engineering samples but the specifications can be considered final for all practical purposes. The screen shots are of both the i5 and the i7 counter parts. Namely the i5-4690K and the i7-4790k. We can see the i7-4790K having a massive stock multiplier of 44 (which equates to 4.4 Ghz because the base clock is 100 Mhz) and this is the result of the improved TIM between the IHS and the die. Well, we have covered all of the above in excruciating detail countless time before so see the specs for yourselves: 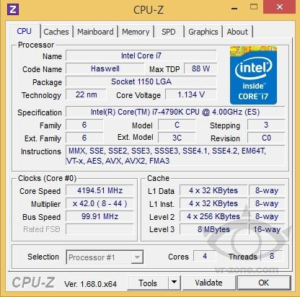 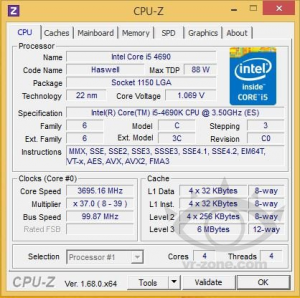 So we also have the CPU Z for the Pentium 20th Anniversary Edition aka G3258 as well. Now as you already know, this particular Pentium will feature an unlocked multiplier and will usher in a blast of nostalgia from the good 'ol overclocking days. So thats it for todays update, I am also attaching the spec table at the end along with the Pentium G3258 CPU Z.