Intel is going to update their desktop consumer platform with two product lines in the upcoming months. The first update that is the Broadwell platform is planned for launch in June 2015 which will give mainstream users two new chips to update to on the current 9-Series chipset platform. The next update will be delivered in Q3 of 2015 that includes the Skylake platform that will feature new Core i7 and Core i5 processors for enthusiasts and mainstream users on the 100-series platform. 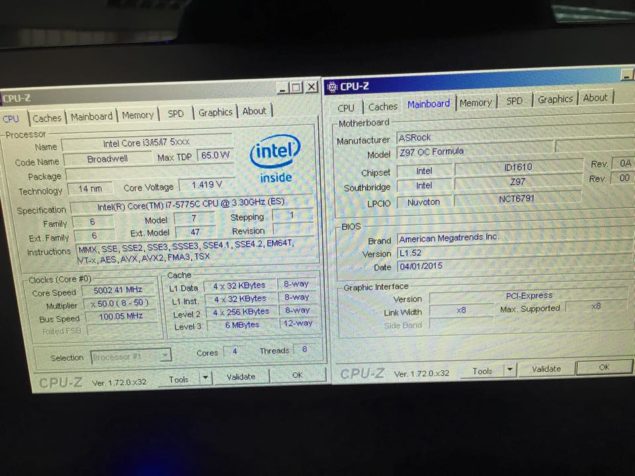 While we are still weeks and months away from each of the upcoming processors family, prominent Chinese website, HKEPC has shown off images of the very first samples of both Broadwell and Skylake generation that are running in their workspace. The engineering samples include the Core i7-5775C which is part of the 5th generation Broadwell family and Core i7-6700K which is part of the 6th generation Skylake family that will be available to consumers this year. Before looking at pictures, let's take a quick roundup of the specifications featured on both flagship processors.

Starting off with the flagship Skylake processor, the Core i7-6700K CPU, we are looking at a quad core design with eight threads which shows a multi-threaded design. The chip features 8 MB of L3 cache and has clock speeds maintained at 4.0 GHz base and 4.2 GHz boost clock. The chip can support DDR4 2133 MHz memory and DDR3L 1600 MHz memory. The Skylake generation of processors are built from scratch with a new CPU architecture feature IA improvements along with graphics enhancements. The feature a efficient design using the 14nm FinFET process technology developed by Intel.

On the Broadwell platform, we are looking at the flagship Core i7-5775C processor. The processor comes with a core clock of 3.3 GHz and 3.7 GHz turbo frequency. The chip is a quad core model with hyper threading enabled and features 6 MB of L3 cache, DDR3 memory rated at 1600 MHz native support along with the mentioned TDP of 65W. The main enhancements to the Broadwell processor don't come in the form of IPC improvements that remain at a steady 5% improvement (year over year increases) but the graphics side which sees an embedded DRAM design of upto 128 MB L4 cache that sits aside the Iris Pro graphics core to leverage performance of the graphics core in AIOs and Small Form Factor PC designs. 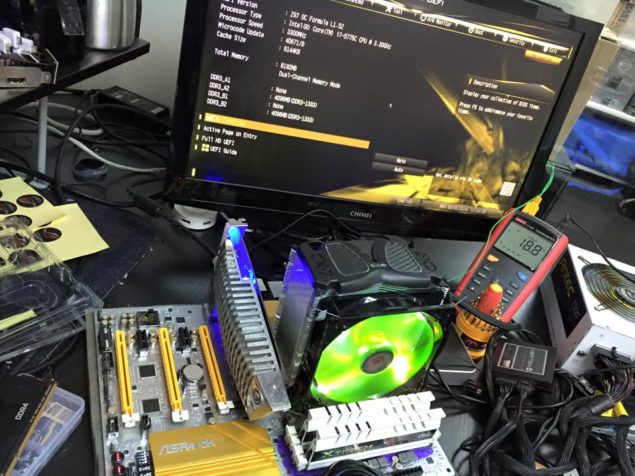 So you must be wondering, what kind of new information we would deliver you in this article? As the title explains, this is the first time we have actually seen running samples of both flagship Core i7 processors at given time which indicates that the processors are being finalized and will hit market within the timeframe indicated on several previous roadmaps.

The Intel Core i7-5775C, that is a moderately clocked chip promised an unlocked design and from the looks of it, the processor can do 5 GHz on air with the latest L1.52 BIOS that is available on the ASRock Z97 OC Formula motherboard which also shows that 9-series motherboards are fully capable of supporting these new chips and the best news is that, the unlocked multiplier design allows relatively easy to overclock the chip to 5 GHz. The voltage maintained for the overclock was specified at 1.419V while rest of the specifications can be seen from the CPUz panel provided by HKEPC. The chip scored completed the 32 million calculations run on WPrime with a time of 4.399 seconds which is lower than what a Core i7-4770K achieves at 4.9 GHz (5+ seconds). The score was posted by overclocker Albert on Chinese forums. 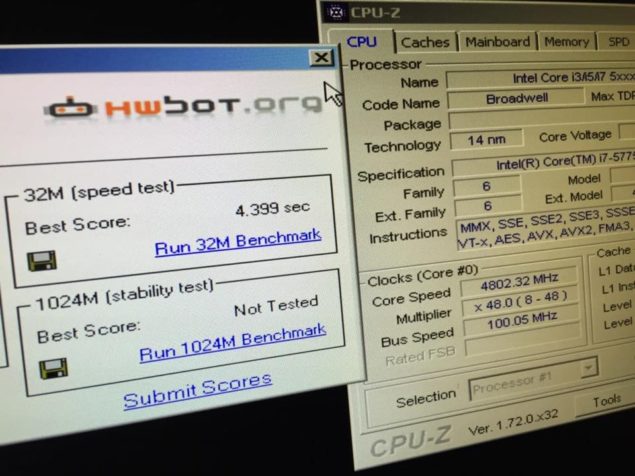 On the other hand, we are also looking at the first running sample of the Core i7-6700K Skylake-S processor. The specifications are properly reported by the CPUz software and the chip is indicated with stepping 3. The chip comes with a multithreaded design, has a 4.00 GHz base clock and can turbo up to 4.2 GHz with a totally revised overclocking methodology that will make overclocking easier for enthusiasts and more refined. The Broadwell and Skylake processors will be launching this year in Q2 and Q3 2015, respectively.