We're fast approaching Intel's eagerly awaited response to AMD's incredibly popular family of Ryzen processors in the form of Coffee Lake. A new family of processors from the blue team that will bring higher core counts and higher clock speeds to the company's mainstream platform.

The flagship for the upcoming lineup is the Core i7 8700K, a six core, 12 thread CPU. The new Coffee Lake chips, flagshipped by the 8700K, are expected to land by early next month. The latest rumors point to an October 5th launch date. But, due to some marvelous sleuthing by Canadian tech journalist Karl Morin, you won't have to wait for the end of the month to know how fast this chip is.

Karl was in attendance at DreamHack 2017 in Montreal where he happened to stumble upon an i7 8700K equipped system from HP. In a truly marvelous bid to find out exactly how fast the 8700K is he proceeded to benchmark the system right there on the spot, in front of the HP representative. Somehow, he got away with it and we've got the numbers for you!

In Cinebench R15 the 8700K scored 196 points in the single threaded portion and 1230 points in the multi-threaded portion of the test.  That's the highest single-threaded score ever for a stock clocked CPU. By comparison the 7700K scores around 192 points and AMD's  8-core 1800X flagship Ryzen chip scores 156 points.  In the multi-threaded portion of the test the i7 8700K also manages to outclass the 7700K which scores around ~950 points, match AMD's six core Ryzen 5 1600X but fall significantly short of AMD's 1800X, which scores ~1600 points.

The final benchmark we have comes straight from the Geekbench database, via VCZ. 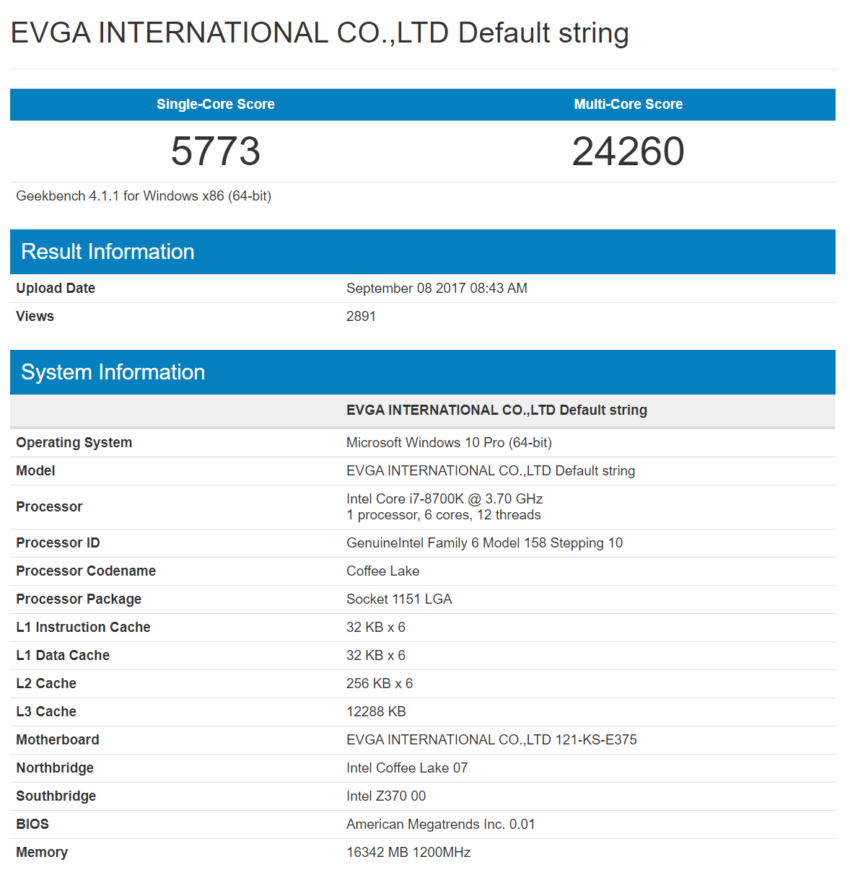 The Core i7 8700, the locked/unoverclockable variant of the 8700K, appears to share an identical pin layout to the current LGA 1151 compatible 7th generation Kaby Lake chips, which is to be expected as both are based on the same Skylake core microarchitecture. Although it does raise questions as to why Intel is breaking Coffee Lake compatibility with existing 200 series motherboards. There isn't any clear good reason for it from where we're sitting. All will become clear come October 5th.