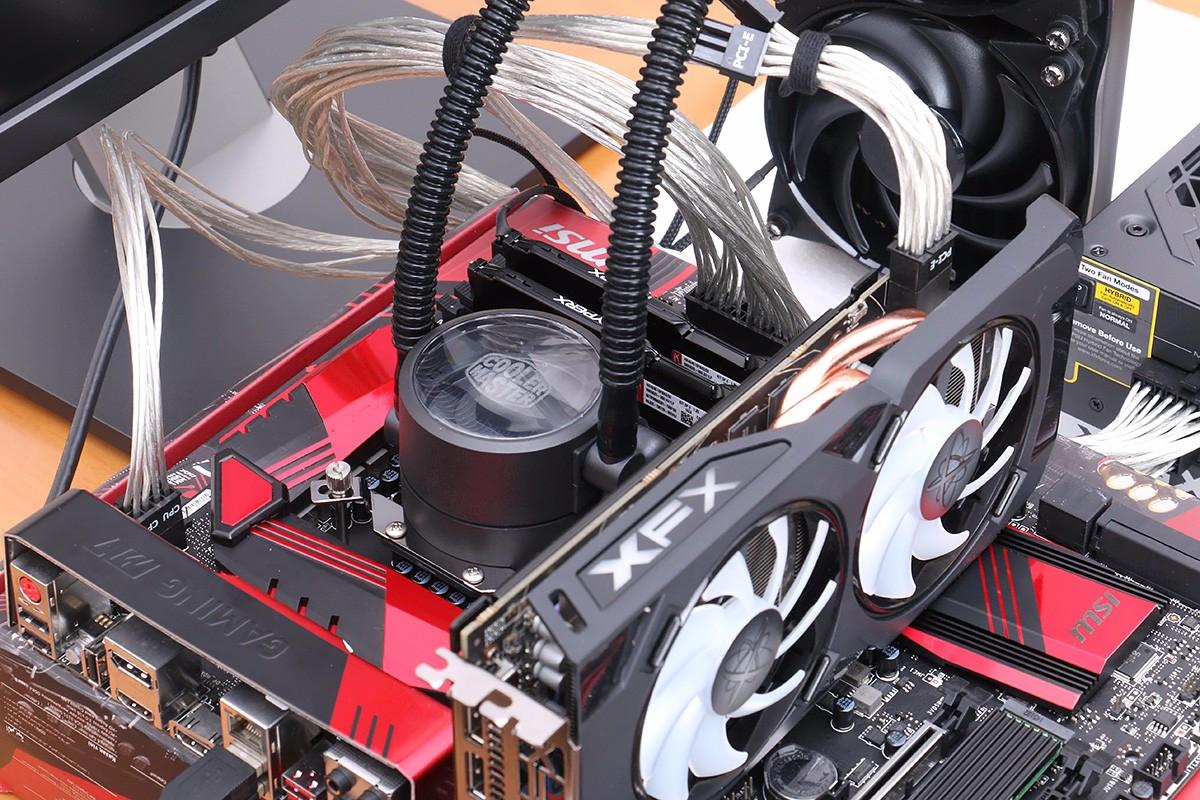 So an interesting story just popped up regarding Intel's upcoming Core i7-7700K processor. A member of the Anandtech Forums has managed to delid the processor and posted some great findings after reapplication of new thermal interface.

The forum member who goes by the name of "RichUK" managed to acquire a retail sample of the Intel Core i7 7700K processor. Several overclock runs were posted and the user went as far to delid the chip and apply new TIM (Thermal Interface Material). The results are shocking as it may proof that Intel has once again used poor quality TIM on their processors.

The issue with high temps on Intel processors arose back in the Ivy Bridge generation where the chips were heating up beyond a certain limit. The heat build up would affect overclocks and would result in poor stability. The issue was fixed when Intel started using higher quality packaging materials and improved TIM in the new Devil's Canyon (Haswell Refresh) lineup. The last three generations of Intel processors haven't seen issues related to heating but the issue might be returning.

Several tech sites have already published reviews of the Core i7-7700K prior to the chip's launch. All sites report higher temperatures for the Kaby Lake part compared to Skylake chips. One reason for that is due to the fact that Kaby Lake ships with higher clock speeds and boards (Z170) are not optimized with voltage ratings of the new processors as seen in Expreview's review. But the other reason could very well be the application of poor TIM between the CPU die and the IHS (Internal Heat Spreader). More performance leaks can be seen here, here and here.

Intel Core i7-7700K Delidded and Tested (Before and After Results)

RichUK started off the testing by acquiring his brand new Core i7-7700K processor. This is a retail chip and not an engineering sample. If the issue was on an ES chip, we could have blamed the early sample for being the reason but all tech sites that have covered the reviews got the retail chip for testing. The system used for test is listed below:

On the first day, the user tested the chip in Cinebench R15 at stock settings. The temps during the test were stable around 60C. This testing was achieved with a Thermalright Ultra 120 tower cooler.

The moment the chip was overclocked to 5 GHz (1.34V) and tested through IBT and OCCT, the temps spiked. During Prime 95 test, the maximum reported temperature was 96C. The chip was stable for 15 minutes in Prime 95 v27.9. The chip passed through 6 hours of stability in Prime95 Small FFTs at 4.7 GHz (1.264V) with temps averaging around 83C. Cooling used was a Corsair H110i set to quite mode. 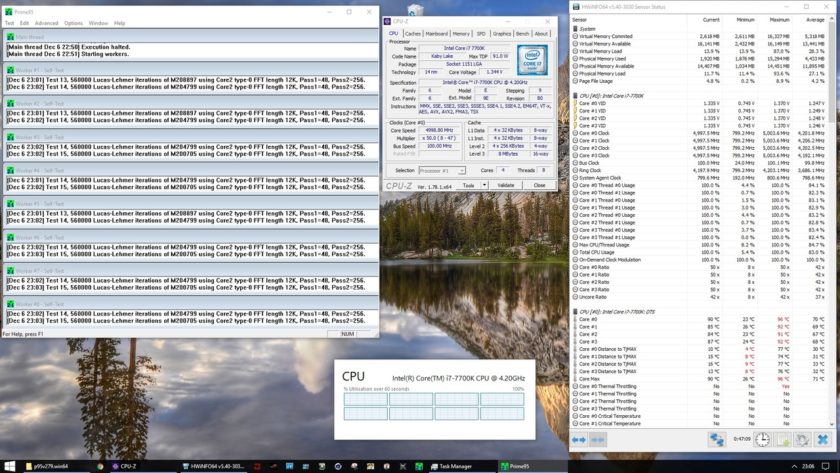 The chip was tested through several benchmarks including Cinebench R15 at the stable clock speeds of 4.7 GHz. 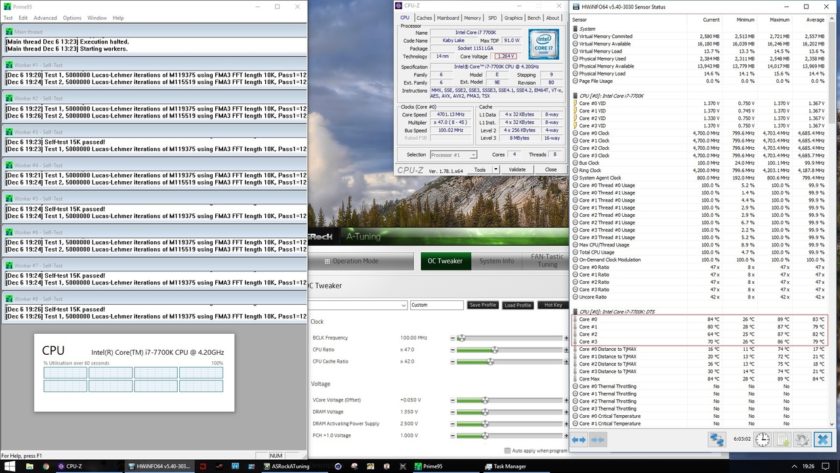 After the CPU was successfully delidded and applied with CoolLaboratory Liquid Ultra thermal paste and put under a Kraken X62 cooler, the chip was once again tested at 5 GHz (1.344V). With the fan operating at 50% and pump operational at 65% (silent mode), the chip reported a decrease of up to 30 degrees Celsius. On average, the chip was around 26C cooler than before delid.

The user reports that previously, the chip would shoot up to 99C but now it was averaging around 66C in Prime 95 v28.7. Furthermore, it was stable while before, it wasn't as much.

The results show that new TIM application and delid improves the temps by a great margin. Delidding generally improves the temps but we don't see such decreases so it is possible that the higher temps on Kaby Lake CPUs could be related to the low quality TIM used. We won't say that it's entirely to be blamed on TIM as the chips also ship with higher clock speeds over Skylake but this is a really interesting find by RichUK. 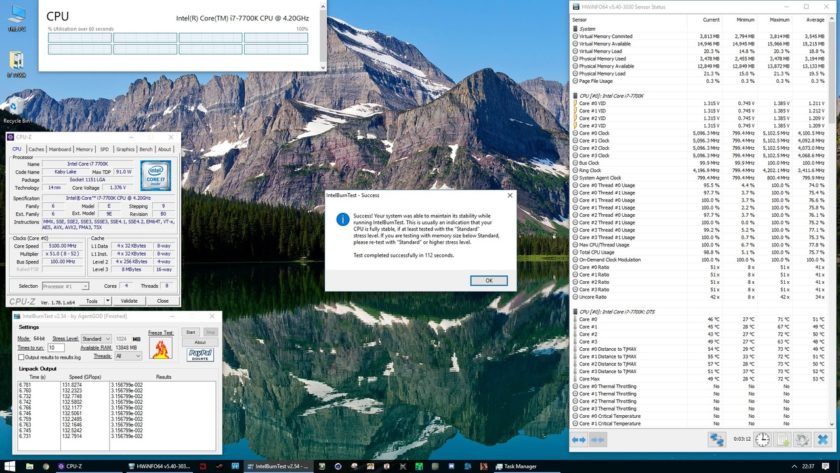 Moving on, we have benchmarks from various Chinese sites which confirm the 10% general performance increase that Kaby Lake brings to the consumer market. The 10% increase may not be much for some but what need's to be seen here is that Intel managed to increase the clock speed under the same 95W head room that was on Skylake.

Kaby Lake being an optimized version of Skylake does what it was intended to do. It's faster than it's predecessor, has higher clock speeds and can overclock to 5.0 GHz, provided you have a good cooling system. The processor achieves what it was meant to and the 200-series platform with a large feature list is something to look forward to. We will be covering a wide range of 200-series motherboards in our reviews once the NDA is over so stay tuned for that.

The other factor is that with Zen based RYZEN chips on the horizon, many users (enthusiasts) may opt to AMD if they can price their chips well against Intel counterparts. A few days ago, we saw a RYZEN chip perform on par with a high-end Broadwell-E chip with similar specs. AMD hasn't shown as quad core competitor for the RYZEN line but it should be expected to compete against the quad-core Core i7 variants. Much is coming in the upcoming months so expect to see lots of action from Intel and AMD in the CPU department.