Several listings of Intel's upcoming Core i7-4770K CPU have appeared on Dutch retailer sites. The Core i7-4770K which is the flagship "Haswell" Fourth generation core processor will launch on June 2nd but looking at the listing so early is a bit weird.

Intel's Core i7-4770K is built on the 22nm 3D transistors technology and would be a Quad Core Core operating at 3.5 GHz base and 3.9 GHz Boost clock. The CPU would feature 8 MB L3 cache, HD 4600 (1250 MHz) series graphics and an unlocked design. The chip would have a rated TDP of 84W which is higher compared to 77W on Ivy bridge based Core i7-3770K. You can check out the complete Haswell desktop CPU lineup here. Furthermore, you can check out its performance results which were leaked a few days ago by TomsHardware over here. 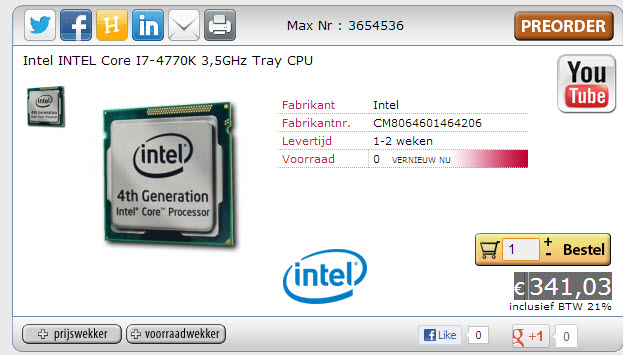