Intel Core i5-3350p Discontinuation Notice has been spotted by the folk over at VR Zone. If the notice is to be believed this is the end of the line for the Intel i5-3350P Processors. The 'p' suffix indicates the absence of an on chip GPU.

The Core i5-3350P Discontinuation Notice states the date of statement to be 3rd September. It also lists a couple of key date for the Discontinuation of the i5-3350P. The 'p' suffix means that the i5-3350P has no integrated graphics. The i5-3350p has a clock speed of 3.1 Ghz and a Turbo of just 3.3 Ghz. With 4 cores the 3350P targets a select niche of the PC Market. 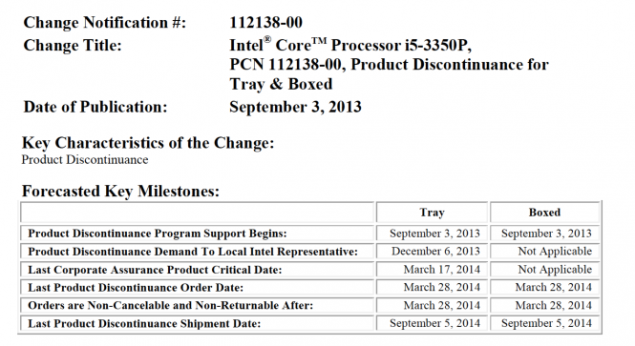 According to the Notice, local retailers will discontinue the i5-3350p by 6 December 2013. However from the Core i5-3350p Discontinuation Notice it seems that even though a cut of notice has been given, the processor will remain in mainstream as long as September 2014, by which time it will be obsolete anyways.

However as of yet Intel's Official Site has no change and the i5-3350p is still listed at $177. With a 22nm fab process and 69W TDP the i5-3350p  was a good choice for many. Certainly those with discrete dedicated graphic cards and limited budgets. Although the pricing of the i5-3350 was moderate.

However it is to be noted that this Core i5-3350p Discontinuation Notice shows forecasted milestones and the actual cut off for the public may cut off sooner or later then the said date depending on factors such as public response. However one thing is clear, the Intel Core i5-3350P must not have been hugely successful if this is its fate. It would also mean that Intel would think twice before making non-gpu processors. 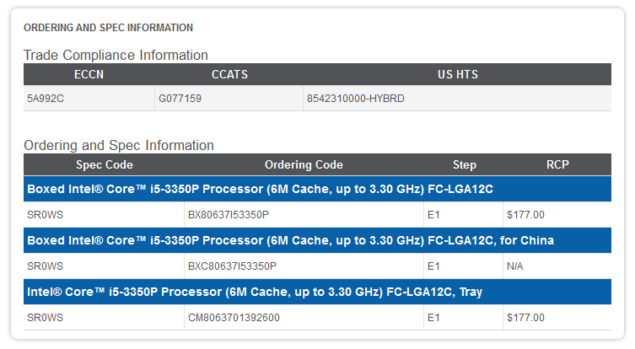