Intel's Broadwell-EP processors are going to launch in Q1 2016 but details of the some specific SKUs have already made their way on the web. Posted over at Chinese online retailer, Taobao, is a specific Intel Xeon "Broadwell-EP" SKU which has been marked as a qualification sample and one can buy it for 15,500 Chinese Yuan, although there are some things to think twice about before buying a non-retail chip off an unknown source, regardless, the user who made the listing posted some benchmarks of the specific chip which look really interesting.

So a little recap to Broadwell-EP, as we know, Intel has processors aimed for servers and workstation platforms that are branded under the Xeon family. These chip can be housed in platforms ranging from single socket, all the way up to 8 socket racks and enterprise solutions with large amounts of cores and memory working in parallel to accomplish several tasks and workloads. The Grantley and Brickland platform which will support the new Broadwell-EP and EX chip models (respectively) has already spanned the market for three generations. These include Ivy Bridge EP/EX V2, Haswell-EP/EX V3 and the latest Broadwell-EP/EX V4 processors. Broadwell-EP/EX V4 processors will be the last processors to arrive as Intel phases out their current platform and move to the new Purely Platform for Skylake and Cannonlake processors. The new Broadwell-EP/EX series will have a launch schedule as detailed below:

The processor we are looking at today is a direct replacement for the Haswell-EP based, 22nm Xeon E5-2698 V3 known as the Xeon E5-2698 V4. From the CPU-Z screenshot provided, the processor features a core clock of 2.10 GHz across the 20 cores which are hyper-threaded down to 40 threads. The CPU block is partitioned into several cache blocks with each core housing 2.5 MB L3 cache which equals a total of 50 MB L3 cache on this processor. The maximum core clock is suggested around 3.5 GHz (boost) while the chip has a TDP range of 130-140W. Compared to the E5-2698 V3 which had 16 cores, 32 threads, 40 MB L3 cache and a core clock ranging from 2.3 GHz to 3.6 GHz, the V4 is an incremental increase since it's also based on an improved 14 nm process node. To sweeten up the deal, Intel will up the standard memory speed up to 2400 MHz, a good increase over the 2133/1866 MHz DIMMs supported as reference on current generation Xeon processors. 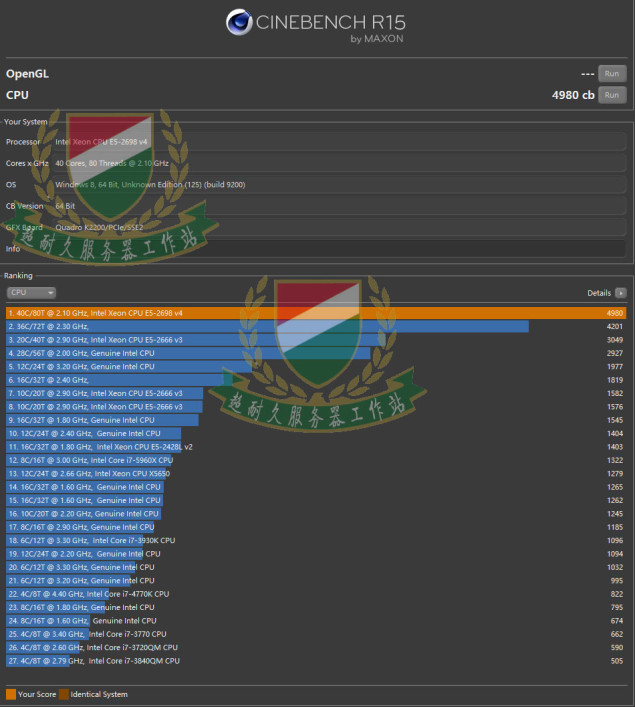 In terms of benchmarks, the chips are a complete beast with DDR4 memory adding to increased memory bandwidth while the L3 cache bandwidth and latency numbers are in a league of their own. In CineBench, the chip (Xeon E5-2698 V4) scored an insane 4980 cb points in multi-threaded benchmark which is greater than the numbers from the 16 core Xeon E5-2698 V3.

This is just a small showcase of Broadwell-EP's power as the bigger 22 core model, the Xeon E5-2699 V4 is also expected to launch at debut of the new and last Grantley Xeon family. You will see more of the new Xeon processors in action in 2016 with Intel aiming to offer a robust server and workstation offering to professional audience. Currently, Intel faces little challenge in the server space as they dominate the entire field. IBM does offer some decent packages in their Power lineup which can be found in top-of-the-line supercomputers but so does Intel. AMD is prepping their Zen core for integration in the next iteration of Opteron, server-focused processors which aim to bring AMD back in the professional CPU space.