Braswell is probably one of the lesser known 14nm Platforms by Intel out there, and for good reason too, seeing its brand new. Basically the Pentium and Celeron branded SKUs that were usually based on the now aged Bay Trail design are now getting their own entry level platform called Braswell. We have covered Braswell news in the past but it feels like every time I do a write up on this, a new introduction is in order. 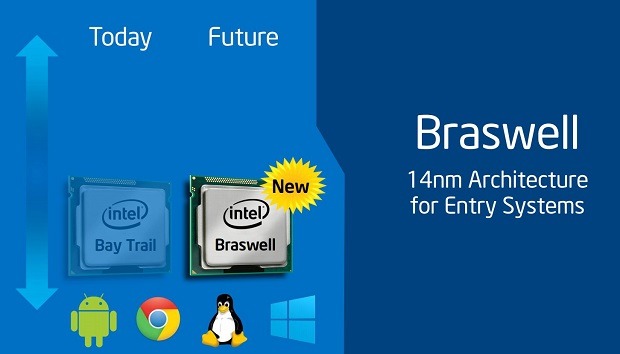 These entry level processors are of course aimed at getting a share of the market that AMD's APUs dominate, specifically, the HTPC market. This market is used mostly for high quality playback and maybe even some casual gaming so a bad iGPU or the lack thereof can be a deal breaker. Blue's answer to this is ofcourse introducing entry level Braswell Processors that will have their own spectrum of notebook, tablet and desktop SKUs. Now Braswell will be one performance tier above the Bay Trail processors while still retaining the same power efficiency. Needless to say the GPU itself must be atleast passable. The GPU, we now know consists of 16 EUs and supports DirectX11; all thanks to Intel HD 8th Generation Graphics.

Now this information comes from Fudzilla.com and they correctly note that this is the same amount of execution units that were present in Ivy Bridge two years ago. Simply put this GPU should smoke the counterpart present in Bay Trail M and D variants. Other specs include a 4 Lane PCI Express 2.0 rated at 5GT/s, which should allow decent dGPU support. The Braswell iGPU will support three 2560x1600 displays and is capable of running highly modern codecs such as VP9 and H.265 (this includes 4k support). Now the Braswell SKUs are either going to be Dual Core or Quad Core versions. The maximum TDP is 10W and the chipset will support DDR3L1600Mhz Memory and SATA III. It also houses integrated 10/100 and 1000 Mbit LAN card as well as integrated audio SMI, LPC and SM Bus support. Braswell SOC will ship in BGA packaging while the desktop parts should come in LGA as well.