Interesting developments are now taking place regarding graphic APIs today, related specifically to AMD's Mantle API. AMD has developed Mantle as a replacement to Direct 3D and Open GL. AMD hopes to eliminate bottlenecks created in application and game speed by allowing developers to access the hardware more 'closely'. It aims to do that by allowing more effective scaling on CPU cores and allowing greater control over the graphics pipeline. Mantle will allow GCN GPUs to better utilize TressFX and TrueAudio programs. AMD is to bring Mantle technology to Linux and Linux based gaming devices. AMD has also prioritized its relationship with developers to develop apps and games that include Mantle support, which will also help drive sales of its GPUs. Mantle is currently in the development stage, ith beta testing taking place. 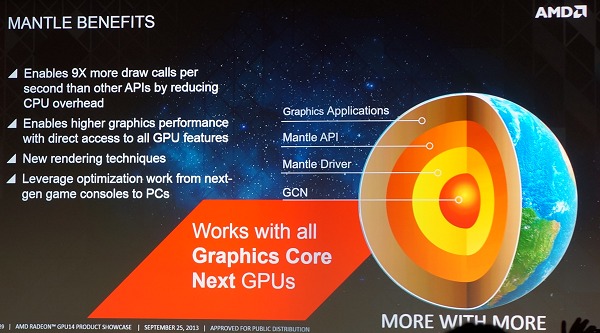 Intel Asks AMD For Mantle Access Yet Continues Commitment For Other Standards. AMD Denies Request Claiming That Mantle Is Still In Testing Stages

Mantle was launched by AMD last year as a low level API which provides a low level code path for developers. PCWorld now reports that Intel has approached the company, expressing interest at an experimental level in the API. Coming towards market share and other gaming libraries, AMD's main competition is Microsoft's DirectX and Open GL and Nvidia's own PhyX engine called Gameworks. Intel currently controls two-thirds of GPU market share and has not committed itself specifically to any API. An Intel spokesman further elaborated: "At the time of the initial Mantle announcement, we were already investigating rendering overhead based on game developer feedback," an Intel spokesman said in an email. "Our hope was to build consensus on potential approaches to reduce overhead with additional data. We have publicly asked them to share the spec with us several times as part of examination of potential ways to improve APIs and increase efficiencies. At this point though we believe that DirectX 12 and ongoing work with other industry bodies and OS vendors will address the issues that game developers have noted."

The company further added that it hopes to improve the graphics industry in general through experimentation. It also  announced that it has also been working with Microsoft and the Khronos group to achieve this end. AMD however declined Intel's request and claimed that the API is still in beta testing phases. AMD's gaming scientist Richard Huddy said "I know that Intel have approached us for access to the Mantle interfaces, et cetera," Huddy said. " And right now, we've said, give us a month or two, this is a closed beta, and we'll go into the 1.0 [public release] phase sometime this year, which is less than five months if you count forward from June. They have asked for access, and we will give it to them when we open this up, and we'll give it to anyone who wants to participate in this." Intel's support for Mantle will prove very beneficial for the API due to the market share the company currently has. Mantle currently has support from 47 development studios according to Huddy. Mantle hasn't been officially launched yet but looks like the future could indeed be very interesting for the API.