At the Intel Developer forum taking place currently in China, the company announced the successor to the Bay Trail SoC. Bay Trail is currently found on Intel's high performance tablets and entry level computing devices. Braswell will feature a 14 nm architecture. This will be similar to its cousin, the next generation Broadwell and an update from the 22 nm architecture currently used in Bay Trail.

New chip to be available for Windows, Linux, Chrome and Android. Support for Chromebook announced as well.

At the developer forum in China, Intel PC chief Kirk Skaugen told Intel employees about Intel's hopes to help Google grow its Chromebook and Chromebox business as well. Chromebook, as we know is a growing sector of the notebook market. The notebooks run Google's Chrome OS and are generally cheaper than $ 400. Intel also claimed that the chip will now boost the notebook designs of Chromebook to 20 in 2014 from four previous year. The move might  also be aimed at attracting more manufactures to manufacture the Chromebook. We can also expect better power efficiency and a significant power boost from Braswell as well. This is due to the shrinkage in its architecture. It will therefore be able to power budget laptops and desktops much effectively. The chip will also make use of the Intel Iris. The SoC design, Intel claims will reduce the overall size of the final product as well as the number of supporting chips required. 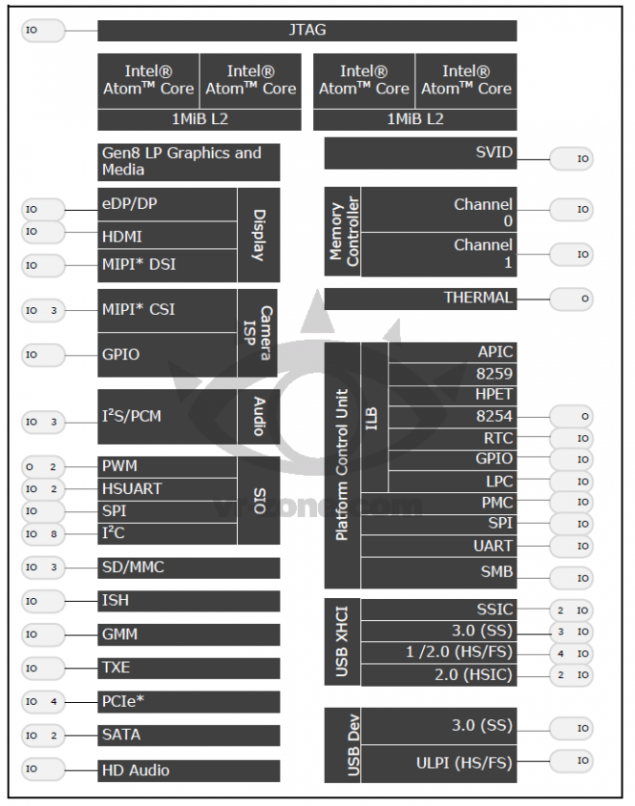 Nothing much to see here expect the 2mb L2 Cache with 1mb cache service two processors.

Braswell to be also joined by a comparatively powerful Cherry Tail design.

In addition to the Brawell, Intel also announced a more powerful variant called the Cherry Tail. This SoC will also be based on the 14nm architecture. Unlike the Brawell though, which is aimed more towards smartphones, the Cherry Tail will be aimed primarily towards tablets. Cherry Trail is reported to be cocked at around 2.7Ghz.
Cherry Trail and Willow Trail will feature Airmont and Goldmont micro architecture respectively, which will be more efficient then current Silvermont used in Bay Trail.y. The current Bay Trail SoC is already featuring the Intel HD Integrated Graphics solution and already incredibly powerful. It is based on Ivy Brdige GPU architecture. The Cherry Trail GPU architecture will be based on Broadwell which will be 40% faster then Haswell which will be 20% faster then Ivy Bridge. So expect massive graphical improvement from Bay Trail to Cherry Trail.

According to Intel, this variant will offer higher performance and reduce overall size and performance. These are similar to the claims made about Braswell and with the reduced architecture of these chips, it seems highly plausible that Intel will be able to deliver on them as well. However, the announcement of these new variants was not the end for the Bay Trail series. Intel also announced its new design plans for the Bay Trail architecture. The design changes are aimed at reducing the amount of components required to manufacture them and also toward further reduction of  the cost of the processors and their supporting components. Intel claims that these updates and changes will allow it's customers to launch Bay Trail based tablets for lesser than $ 100.