We have received word that Intel and AMD will be focusing some more on the x86 Platform and break into new markets in 2014. These markets will be Tablets and Ultrabook focused, more specifically 2-in-1s.

The term 2-in-1 is not a very common PC Tech term so allow me to tell you what it is. 2-in-1s are basically the Tablet - Laptop Hybrid designs that have popped up. Remember the Tablet with the dock able keyboard? Yup thats it. However in the past these designs were more or less a gimmick with the 2-in-1 essentially being a glorified tablet. However in 2014, the 2-in-1s will become much more true to the name. Now we dont have specifics for AMD's plan, but we do have the same for Intel.

As you can see Intel expects to increase its Bay Trail based Tablet shipping (focused on 2-in-1s) by a factor of 4. Certainly a very clearly outlined road map is in motion Intel plans to target every market niche of the 2-in-1s starting from the $199 range all the way up to $799. Intel is clearly gunning for this one last uncharted territory in the x86 Market, needless to say AMD will come guns blazing (or rather ARM-Blazing) into the foray too. We also have specific details on Intel's Plans for the 2-in-1 market: 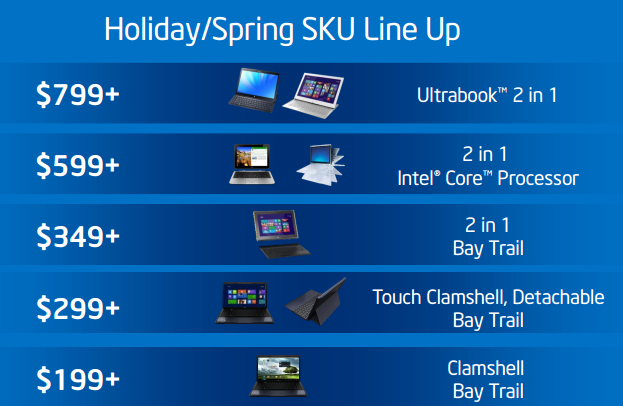 Now you might remember that we leaked the Broadwell road maps (Here and Here), and it seems to us that those foreshadowed Intel's increased interest in the Tablet sector. Remember how the lowest TDP was only of 3.5 W (2.8W SDP) ? Well this would explain alot. Battery life is a major factor in the quality of any portable device and the Macbook would not be able to push 10+ Hrs of battery time without Intel's advances in TDP and Efficient Architecture. The effect is further compounded because of Fan-Less Design operation. I would be willing to wager that the more efficient of these model woulds would easily compete with Apples products with battery life nearing 10hrs. Do note that it will only be impressive if said product is a true 2-in-1 and not a glorified tablet. But looking at Intel's Plan for the same, i dont think there is any worry on that count.

#Intel and AMD plan to break into and focus on the x86 Tablet Market in 2014. This would explain the low TDP of 14nm. http://t.co/9KlKckgcdk