Intel Intel Aims for Mobile Space with the 32nm Atom Z2420 Lexington SOC and 22nm Bay Trail SOC which will pave the way for Intel in the mobile sector with companies such as Acer, Lava, and Safaricom on-board.

The Atom Z2420 a highly integrated system on chip making use of a 32nm core process with high K/metal gate transistor technology. The Atom Z2420 operates at 1.2 GHz and has incredible power efficiency over the Z2460 with its Intel Burst Performance Technology. The CPU also comes with Hyper-Threading support. Being an SOC, the Atom Z2420 comes with an integrated dual-channel memory controller within the LPDDR2 PoP package. 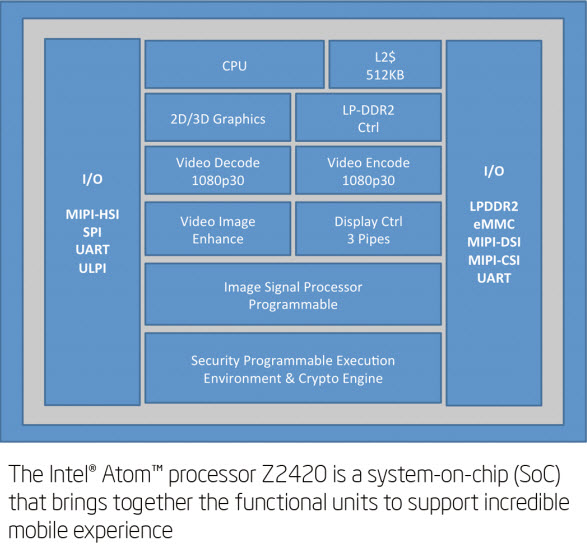 Intel additionally detailed its forthcoming atom chips too such as the Dual Core Intel Atom Z2580 processor platform formerly known as Clover Trail+ being twice as fast as current generation Z2460 Atom. The new chip would be available inside  performance and mainstream smartphones. 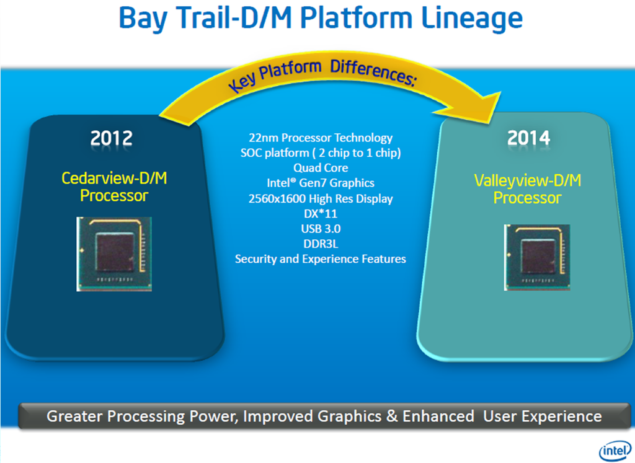 "With Bay Trail we will build on the work done with our current SoC development and accelerate very quickly by leveraging Intel's core computing strengths," Bell said. "We will take advantage of the tremendous software assets and expertise at our disposal to deliver the best products with best-in-class user experiences."

You can learn more about Intel's Atom and Mobile platform from the press release below:

"The best of Intel is coming to a mobile device near you," said Skaugen. "We are set to deliver the biggest increase in battery efficiency in Intel's history with 4th generation Intel Core processors, while adding broad new human interfaces to computing devices through touch, voice, facial recognition, and gesture-based interactions. We're also significantly extending the performance and power savings in Atom processors as we accelerate our mobile offerings in an unprecedented fashion in 2013."

Building on the progress first detailed a year ago at CES, Intel unveiled a new low-power Atom processor-based platform (formerly "Lexington") and smartphone reference design, targeted at the value smartphone market segment, which industry sources predict could reach 500 million units by 2015. Customers announcing support for the platform include Acer, Lava International and Safaricom.

"The addition of the low-power Atom platform enables Intel to address new market segments and further rounds out our expanding portfolio of smartphone offerings," said Bell. "We believe the experience that comes with Intel Inside will be a welcomed choice by first-time buyers in emerging markets, as well as with our customers who can deploy more cost-conscious devices without sacrificing device performance or user experience."

The new value offering includes many high-end features including the Intel Atom processor Z2420 with Intel Hyper-Threading Technology that can achieve speeds of 1.2 GHz, 1080p hardware-accelerated encode/decode, and support for up to two cameras delivering advanced imaging capabilities, including burst mode that allows people to capture seven pictures in less than a second in 5-megapixel quality. The platform also includes the Intel XMM 6265 HSPA+ modem that offers Dual Sim/Dual Standby capability for cost-conscious consumers.

Speaking to a robust product roadmap and growing ecosystem of tablet and tablet convertible devices running on Intel technology, Bell reinforced the wide range of tablet designs based on the Atom Processor Z2760 running Windows 8 now on shelves and online from OEMs such as Acer, ASUS, Dell, Fujitsu, HP, Lenovo, LG and Samsung. More tablet designs are scheduled to ship over the coming weeks. Enabling a mobile, connected and full Windows 8 experience, the Atom platform boasts all-day battery life and is more power- efficient than competitive offerings.

He also unveiled details about the company's next-generation 22 nm Atom SoC, codenamed "Bay Trail," which is already booting and scheduled to be available for holiday 2013. The first quad-core Atom SoC will be the most powerful Atom processor to date, delivering more than two times the computing performance of Intel's current generation tablet offering. It will also include new improved integrated security offerings. These improvements will enable new experiences for business and personal use in devices as thin as 8 mm that have all-day battery life and weeks of standby, all at lower prices.

"With Bay Trail we will build on the work done with our current SoC development and accelerate very quickly by leveraging Intel's core computing strengths," Bell said. "We will take advantage of the tremendous software assets and expertise at our disposal to deliver the best products with best-in-class user experiences."

Since mid-2011, Intel has led the industry in enabling Ultrabook devices aimed at providing new, richer mobile computing experiences in thin, elegant and increasingly convertible and detachable designs. To enable these innovative designs, Intel announced last September that it added a new line of processors to its forthcoming 4th generation Intel Core processor family targeted at about 10 watt design power, while still delivering the excellent performance people want and need.

Skaugen announced today that the company is bringing the low-power line of processors into its existing 3rd generation Intel Core processor family. Available now, these chips will operate as low as 7 watts, allowing manufacturers greater flexibility in thinner, lighter convertible designs. Currently there are more than a dozen designs in development based on this new low-power offering and they are expected to enable a full PC experience in innovative mobile form factors including tablets and Ultrabook convertibles. The Lenovo IdeaPad Yoga 11S Ultrabook and a future Ultrabook detachable from Acer will be among the first to market this spring based on the new Intel processors and were demonstrated by Skaugen on stage.

The 4th generation Intel Core processor family enables true all-day battery life -- representing the most significant battery life capability improvement in Intel history. Skaugen disclosed that new systems are expected to deliver up to 9 hours of continuous battery life, freeing people from some of the wires and bulky power bricks typically toted around.

"The 4th generation Core processors are the first Intel chips built from the ground up with the Ultrabook in mind," Skaugen said. "We expect the tremendous advancements in lower-power Core processors, and the significant ramp of touch-based systems will lead to a significant new wave of convertible Ultrabooks and tablets that are thinner, lighter and, at the same time, have the performance required for more human-like interaction such as touch, voice and gesture controls."

To demonstrate the impact of the 4th generation Intel Core processor family, Skaugen showed a new form factor Ultrabook detachable reference design (codenamed "North Cape") that converts into a 10 mm tablet and can run on battery for up to 13 hours while docked.

Advancements made in the way consumers will interact with their computing devices were also demonstrated, including natural and more immersive interaction experiences using a 3-D depth camera. Intel showed applications running on an Ultrabook in which objects can be manipulated naturally with free movements of the hands, fingers, face and voice. One application that was demonstrated can be used for enabling new and immersive video collaboration and blogging experiences. These were all enabled using the Intel Perceptual Computing SDK Beta. This year, Intel expects more Ultrabooks and all-in-one (AIO) systems to offer applications for voice control (Dragon Assistant) and facial recognition (Fast Access) for convenience and freedom from passwords.

During the event, Skaugen also demonstrated new adaptive AIO systems that have a battery built into the screen and can be picked up and easily moved around the home or office as needed. Adaptive AIOs are high-performance computers with large touch-enabled screens that can be used as a multi-user touch gaming system, or as an interactive art creation device, as well as for many other shared, in-person experiences. Simply put, these devices will help bring "game night" back to its roots through shared experiences where families and friends gather around the system to interact, play and have fun.

Intel also continues to drive access to content on Intel-based devices by working with video service providers around the globe such as Comcast and Bouygues Telecom to create television experiences that will allow customers to view live and on-demand pay TV content. Intel is collaborating with Comcast to bring the XFINITY TV experience to multiple screens in the home including Ultrabook devices, and Intel-based AIO PCs and tablets.

This experience is made possible by the Intel Puma 6MG-based XG5 multi-screen video gateway developed by ARRIS. This new category of devices allows any screen in the home to access live and on-demand entertainment premium content. Intel is also working with Bouygues Telecom to bring customers in France the Bbox TV experience to these same Intel-based devices. Consumers will experience both live TV and video on demand anywhere on the Bouygues Telecom network. Press Release Link 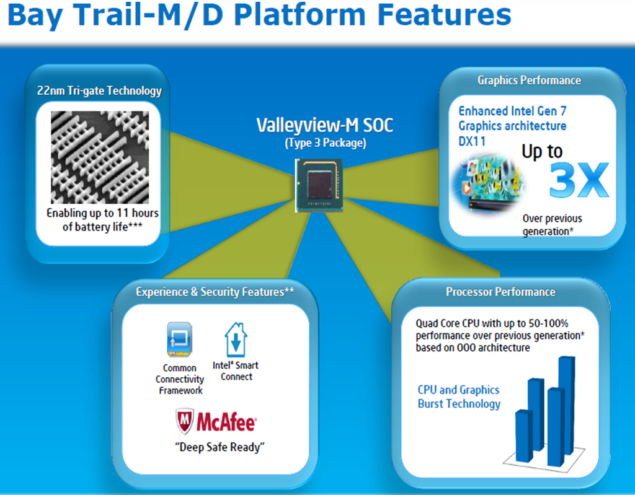 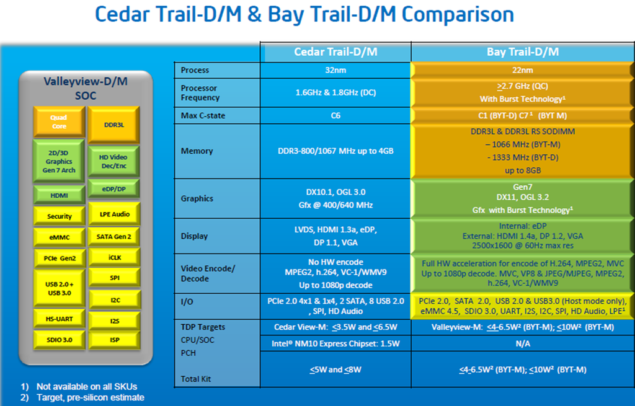