Intel's 2016 desktop roadmap has been leaked confirming the arrival of Broadwell-E, Kaby Lake-S and Apollo Lake chips. Since last week, we have seen several leaks regarding Intel's upcoming mainstream and enthusiast platforms and the latest roadmap detailing the launch schedule of these CPUs has been leaked by Benchlife. It confirms what we have been hearing over the internet that Intel is indeed readying several chips for launch in 2016.

As we know, Intel has three new desktop CPU families prepped up for launch in 2016. First up is Broadwell-E which will be targeted at enthusiasts and extreme desktop users. This launch will be followed by Apollo Lake and Kaby Lake-U chips for the embedded segment to power low-energy devices. Later in the year, Intel will launch the Kaby Lake-S mainstream platform and also the new Skylake-S chips featuring the GT4e chips with embedded DRAM. We are going to take a closer look at the launch and SKU details of the new platforms in detail below:

First up, we have the Broadwell-E HEDT family which is powering the enthusiast X99 platform. The Broadwell-E family will consist of four new offerings which include:

The Intel Core i7-6950X processor will be the flagship processor of the Broadwell-E lineup. The processor will feature 10 cores and 20 threads. The processor will run at a base clock of 3.00 GHz and a 3.50 GHz boost clock. The processor will come in an unlocked package to allow overclocking support to enthusiasts but I think Intel will be making a point with the upcoming launch, that they are not stopping at 8 cores for their HEDT family but increasing the core count even further for consumers. The processor rocks 25 MB of L3 cache (2.5 MB per core) and will be compatible with current generation X99 motherboards that feature the LGA 2011-v3 socket. There’s no reason to believe that board partners of Intel won’t launch new motherboards to mark the arrival of the first 10 core processor from any company, whether Intel or AMD in the consumer market. Although Intel and AMD have both released higher core count processors in the server and workstation market, no 10 core high-performance CPU has yet launched in the desktop PC market. The Core i7-6950X is expected to launch at price of $999 US.

Although the Core i7-6950X is one hell of a processor, Intel will also launch three more SKUs in the Broadwell-E lineup. This is the first time that Intel is launching four processors in an HEDT lineup but it might cover up the big price differences we have seen in the older lineups. Starting off with the Core i7-6900K which is an 8 core processor with 16 threads and has 20 MB of L3 Cache. Now the processor specifications reminds me of the 8-Core Core i7-5960X which is the flagship Haswell-E offering that launched back in 2014 but fear not, this new processor would not only be a little bit cheaper than the Core i7-5960X but also come with faster clock speeds of 3.20 GHz base and 3.70 GHz boost. All along with the added sweetness of an unlocked multiplier and full support on the latest X99 motherboards to allow for better overclocking. The Core i7-6900K is expected to hit the market at around $600 US range.

At the bottom of the lineup, Intel will have two SKUs, the Core i7-6850K and the Core i7-6800K. Both CPUs have 6 cores and 12 threads and come with 15 MB of L3 cache but the interesting thing is that both chips are placed for the entry level enthusiasts which means these will be retailing for a price of sub-$450 US. The Core i7-6850K will feature a base clock of 3.60 GHz base and 3.80 GHz boost while the Core i7-6800K will feature clock speeds of 3.40 GHz base and 3.60 GHz boost. Both processors are fully compliant with the LGA 2011-3 socket and will feature support for quad channel DDR4 memory with speeds of up to 2400 MHz (O.C+). The new chips will be arriving in the second quarter of 2016 (probably around Computex 2016 in June).

On the mainstream side, Intel plans to launch their 7th generation core family codenamed Kaby Lake-S. Kaby Lake will be available in various configurations for desktop and mobility market, the ones we are going to talk about are desktop chips which will retain support on current generation motherboards with the LGA 1151 socket. The more surprising bit is that Intel is yet again offering users a new chipset in the form of the 200-series chipset that will launch along side the Kaby Lake processors. Just like the transition from Z87 to Z97, the new 200-series chipset will mostly remain the same but will include increased I/O performance that is very important for the platform to be ready for Intel’s next generation Optane storage products that use Intel’s 3D XPoint memory architecture. So the basic features of the 200-series chipset aside from supporting Kaby Lake-S processors will include up to 24 PCI-e 3.0 lanes (up from 20 on 100-Series Chipset), 6 SATA 3.0 and 10 USB 3.0 ports.

Another crucial feature of the new lineup is that not only will the Kaby Lake processors be compatible with the current 100-series motherboards but Skylake processors, available today, will also be compatible with the 200-series platform. This cross-generation support will be quite useful, not only for new users but also existing user base that may see the need to update to faster processors in the Kaby Lake-S lineup. Intel’s disruptive Optane SSDs and DIMMs will be a major feature set for the 200-series chipset as the faster storage solutions will not only result in responsive PCs but also better system utilization that is otherwise bottlenecked by conventional HDDs and even some older SSDs.

Intel Kaby Lake processors in general would be getting increased core performance (expect the usual 5-10% improvement) unless Intel plans to do something very different with Kaby Lake which seems highly unlikely. The processors will retain the basic features such for enthusiasts such as enhanced full range BCLK overclocking and 95W “Unlocked” options to choose from. While Intel has increased the core count on their enthusiast chip platform, things will remain the same on their mainstream platform with both dual and quad core (35W and 65W options) available to consumers along with the enthusiast quad core options. Other key features on the media and display side include 5K (30Hz) on one display and 5K (60Hz) dual display capabilities, HEVC 10-bit hardware decode, VP9 10-bit (hardware), UDH/4K display resolutions and support for Intel’s Thunderbolt gen3 support.

As for the specific SKUs, we will see Kaby Lake-S  (4+2) and Kaby Lake-S (2+2) SKUs. These chips will feature the GT2 graphics chip and feature integrated HDCP 2.2 support. There’s also a new Skylake 4+4e family planned for launch in 2016 which will be compatible with only KBL PCH-H (200 platform) which is surprising considering that Kaby Lake itself is compatible on both platforms while Skylake processors will require the newer platform for proper support. It kind of sounds like a repeat of the Broadwell-C series which was the only desktop chip launched in the Broadwell family that had GT4e iGPUs and vast eDRAM cache of 128 MB. For Kaby Lake, this eDRAM cache is increased from 128 MB to 256 MB and also offers several enhancements to the core GPU design structure to lift performance levels across the board. The Kaby Lake lineup is placed on a similar path like AMD’s Zen which is expected to hit the markets in Q4 2016 and will pack vastly improvement IPC and performance over the company’s older Bulldozer core and its derivatives.

Intel will also introduce new Skylake-S processors in Q4 2016. The new desktop focused chips will feature GT4e graphics chip and will be available in a similar manner as the Broadwell-C processors which launched back in Q2 2015 at Computex. Featuring faster GT4e graphics processors, the new chips will be compatible with the LGA 1151 socket and available in only quad core options. There's no mention if there will be multiple variants of the processor family but Intel has 35W variants under evaluation aside from the standard 65W variants which will be available to consumers. The processors will feature up to 256 MB of eDRAM L4 cache and 72 execution unit which will be offering over 1.152 TFLOPs of compute performance.

In the low-end and low-power sector that powers the Celeron and Pentium lineup, Intel will be replacing their Braswell family with new Apollo Lake chips. The new family which will be based on an architecture Goldmont 14nm architecture will replace the Airmont based Braswell processors, bringing improved IPC performance and Gen9 graphics. Intel has listed that the Apollo Lake family will be available in both dual and quad core offerings that will be configured in 6W up to 10W SOCs. The processors will be available in BGA package which means that they will have to be configured on boards prior to sale. Intel will house them inside their NUCs and mobile PCs while offering them inside the embedded market. The Apollo Lake family is expected to hit market in late Q2 2016. 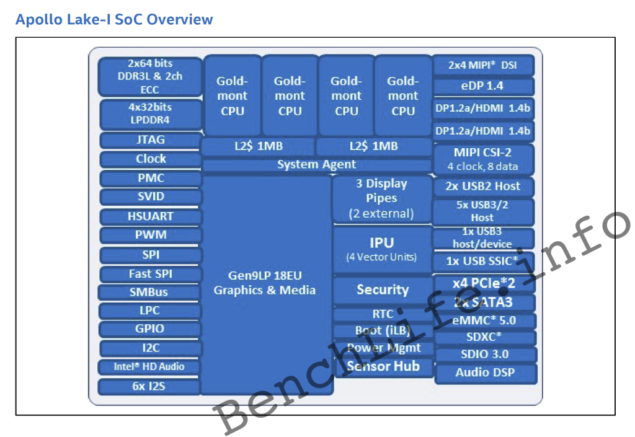