Intel's Broadwell CPU microarchitecture has been detailed and previewed showcasing the several core features of Intel's next generation micro processors. Anandtech has received several press slides from Intel detailing the new features of Intel's upcoming Core M processors which will be the first processor family to feature Broadwell core architecture giving us a glimpse at what to expect from the new core. 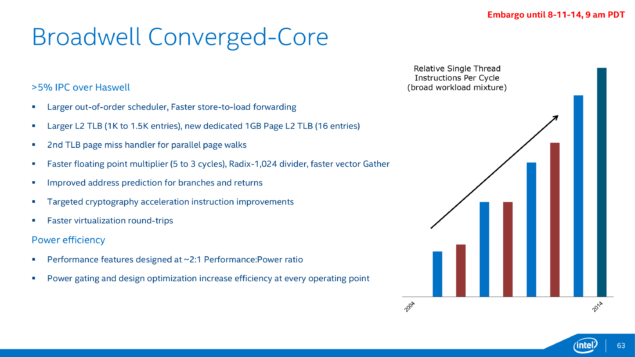 Intel's Core M is basically the Broadwell-Y SKU which we have had details regarding since a while but the core architecture details have been a secret until now. This is just a preview of what to expect from the Broadwell CPU architecture but there's some juicy information regarding Broadwell in these slide so let's get on with it. Intel has recently released their Haswell Refresh lineup and we know the reason behind this launch is due to the fact that Intel had nothing else in their pockets to launch this quarter. Intel's 14nm is hit by production issues and they are getting desperate to get new products out as soon as possible which is the sole reason why Brian Krzanich vowed to have Broadwell chips ready by Holiday 2014. Hence, this quarter we saw a refreshed line of Haswell chips, a family of new K-Series Haswell processors codenamed Devil's Canyon, a new chipset platform for Haswell and beyond (Z97 / H97) and the upcoming Haswell-E HEDT platform which arrives on 29th August 2014. So far, this year has been Haswell this and Haswell that but Intel's Haswell-E platform will be the last of the Haswell micro architecture we will get to see as Intel is planning for Broadwell by Q4 2014 (atleast for the mobility market).

The key focus of Broadwell is to enhance power efficiency while improving performance on a smaller 14nm node. To demonstrate their capabilities, going mobile first makes sense with the Core M series. As touted in Intel slides, their aim to reinvent  the notebook is sort of working out with these new power efficient chip and the roadmap from 2010 - 2014 shows that features including thickness, TDP, Graphics, IA Core, and Battery Life has improved. We are looking at a 4 times reduction in thermal dissipation power, 7 times improvement in graphics and twice the battery life using battery half the size. Before we talk about the SOC, let's take a brief look at the Broadwell CPU architecture itself.

Intel's Broadwell is basically a Tick which means its a die shrink of a new architecture that was previously intro'd (Haswell = Tock). Based on a smaller, 14nm node, Intel's Broadwell has managed to integrate new features aside from just core enhancements. Given Intel's slow generation over generation IPC improvement, we are looking at only 5% increase in instruction per clock compared to Haswell which falls in line with Ivy Bridge and Haswell. Intel hasn't gained significant gains in the IPC department since a while but this model works for them. Tweaks that help deliver these enhancements include larger schedulers and buffers, larger L2 cache with dedicated 1 GB page L2, Faster floating point multiplier, Radix-1024 divider, improved address prediction for branches, faster round-trips for visualization and targeting cryptography acceleration instruction improvements. These enhancements will set the basis of the 5% IPC gain over Haswell while power efficiency will see new power gating and design optimizations. A 5% gain over Haswell is decent and since these core enhancements will scale across the entire Broadwell CPU family, we can expect the same from the Broadwell desktop processors which arrive in Q1 next year. 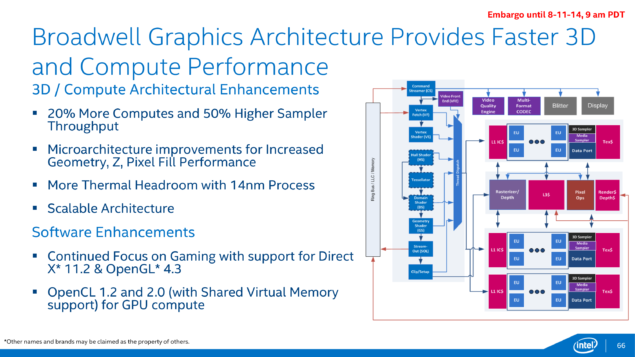 Over in the GPU department, Broadwell will feature several architectural enhancements with increase execution units of 20% which means we are looking at a EU count of 24 on Broadwell compared to 20 on Haswell-Y series. It will also feature increased sampler throughput of 50%. So for desktop parts this means that iGPU enabled CPUs which featured 40 EUs will be upgraded to 48 EUs on the Broadwell microarchitecture delivering faster clock speeds thanks to more thermal headroom provided on the 14nm process, increased geometry, Z, Pixel fill rates and enhanced performance per core. Software side improvements will include continued focus on gaming with support for DirectX 11.2, DirectX 12, OpenGL 4.3 and Open CL 1.2 / 2.0 for GPU compute. The GPU side will also feature a hybrid styled H.265 decoder which will use shaders of the iGPU to decode and execute the decoding process. While this process is useful over the traditional CPU, it is less power efficient. The Broadwell Y-Series CPU will feature 4K video support, HDMI 1.4 and Display Port 1.2 / eDP 1.3a.

Coming back to Core M after this short architecture analysis, the Intel Core M chips are 3-5W SOCs which Intel claims can run as fanless designs. The Broadwell-Y "Core M" is specifically designed to run low-power devices with its SOC design which is smaller in size than the upcoming Broadwell based SOCs, features lower leaked with 10-15% transistor performance improvement and 10% lower operating voltage. Intel is so much focused on the power output of the Core M die that they even designed a new PCH known as Broadwell PCH-LP which is focused on power. Located on the same die, the Broadwell PCH (Low Power) comes with a audio DSP featuring advanced post processing for audio and PCI-e storage options. This tones down the idle PCH power down to 25% compared to last year Haswell-Y parts and reduces active power by 20% compared to Haswell PCH-LP. 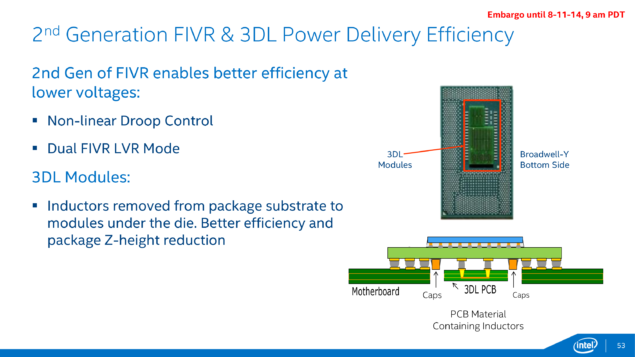 You may also remember FIVR? A technology that is going to be phased out when Skylake hits the market but Intel is keeping it alive for one more generation and with 2nd generation fully integrated voltage regulator that is used on Broadwell, the Core M processors deliver better efficiency through non-linear Droop control and dual FIVR LVR modes. Intel has also used a new technique to relocate inductors from the main die to integrate modules under the die using 3D Layering (3DL PCB) which save power. All these technologies add up to deliver lower power output on Broadwell generation of processors including the new power gating and boost algorithms which maximize frequency output while conserving clock speeds for power when under idle mode. To sum this all up, Intel's Core M CPU which is Broadwell-Y SKU is going to be power efficient and deliver several features and enhancements in the mobility market.

So where does this leaves the desktop processors? As mentioned, we won't see desktop chips based on Broadwell architecture this year and they will arrive next year in Q1. The Broadwell chips will be compatible with 9-Series boards but their launch will soon be followed by Skylake which is Intel's next generation 14nm architecture and desktop Skylake chips along with the 100-series chipset platform is already planned for a Q2 2015 launch so the launch of Broadwell will make little sense to consumers. Specifications of Intel's Core M series processors are already out and can be seen below: 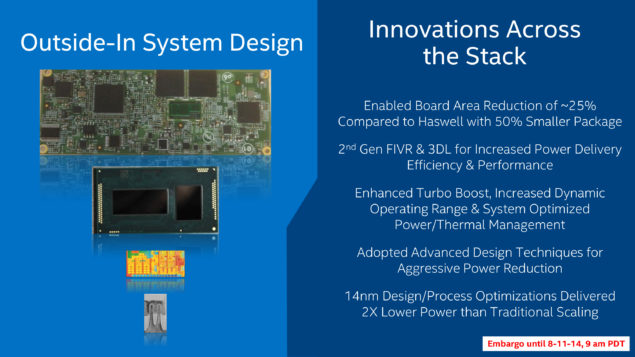 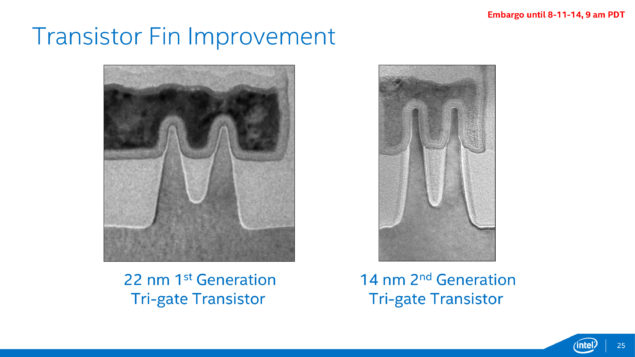 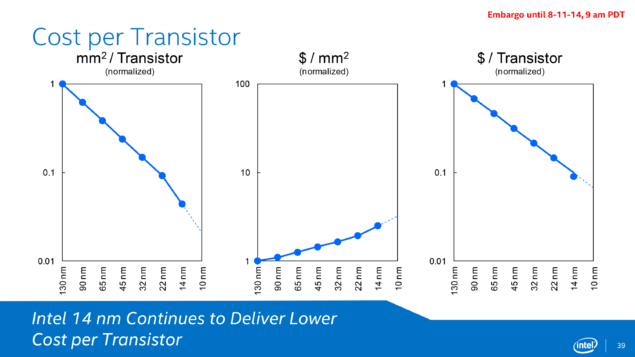 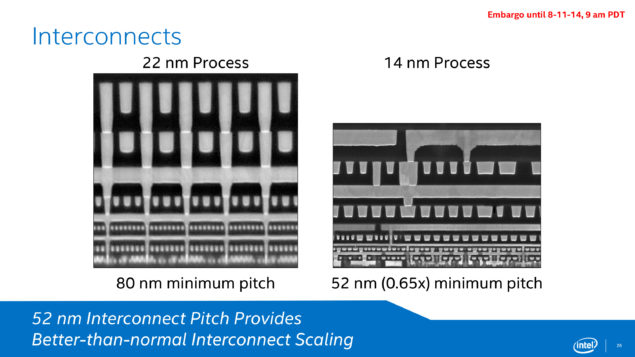 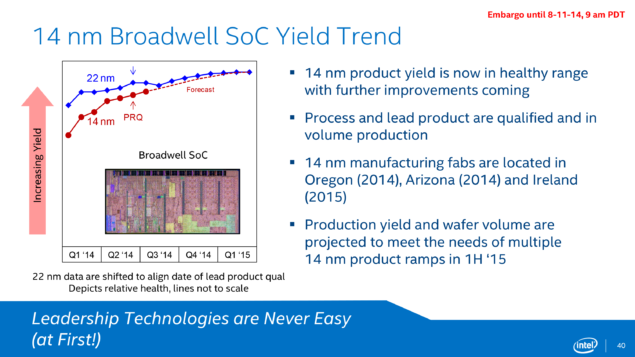