Intel is officially going to launch their 5th generation Broadwell based desktop processors on 2nd June, 2015. The report comes from GDM.OR.JP, who report that the 14nm Broadwell based Core i7-5775C and Core i7-5675C processors will be launching during the first week of June which is just in time for Computex 2015 that also begins on the same date. 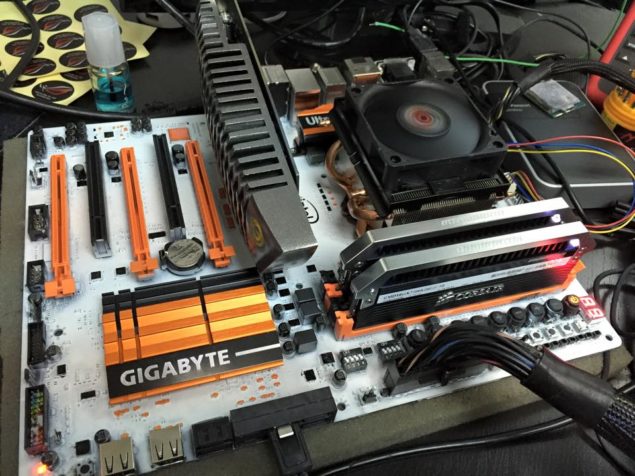 The launch confirms previous speculation about the launch timeframe for Broadwell which we suggested could end up around Computex. Furthermore, the two desktop chips will be followed by three BGA chips (R-Series) that will be available in products featuring soldered components such as NUCs, AIOs and SFF designs. Aside the specifications, website HKEPC posted a few benchmarks of the Core i7-5775C on their Facebook aside from the benchmarks they posted yesterday on the ASRock Z97 OC Formula. The latest benchmarks were performed on the Gigabyte GA-Z97X-SOC Force which also features full support for Broadwell based processors with the new BIOS update.

The WPrime (32M) benchmarks posed by HKEPC show that the flagship Core i7-5775C processor achieves a score of 5.702 seconds at stock clock while scoring 4.399 seconds with a overclock of 4.8 GHz. Similarly, the chip completes a run through SuperPI (1M) in 10.047 seconds. These benchmarks can be compared to Haswell based Devil's Canyon chips to see that there are small gains in performance in Broadwell which runs and overclocks just as well with superior graphics chips. The price remains to be seen since that will determine whether Broadwell will be worth as an upgrade path to users who are already running Haswell and Ivy Bridge based processors.

On the Broadwell platform, we are looking at the flagship Core i7-5775C processor. The processor comes with a core clock of 3.3 GHz and 3.7 GHz turbo frequency. The chip is a quad core model with hyper threading enabled and features 6 MB of L3 cache, DDR3 memory rated at 1600 MHz native support along with the mentioned TDP of 65W.

The second part is the Core i5-5675C which is a quad core model with no hyper threading support and comes with a clock speed of 3.1 GHz base and 3.6 GHz turbo frequency. The model features 4 MB of L3 cache, DDR3 1600 MHz memory support and a TDP of 65W. Both chips house the Iris Pro 6200 iGPU which is a Broadwell GT3e model featuring 48 Execution Units, 128 MB of eDRAM (L4) cache and 128-bit memory interface. Clock speeds for the iGPU on both processors was not determined in the listed specs but can be expected around the 1 GHz mark.

The main enhancements to the Broadwell processor don’t come in the form of IPC improvements that remain at a steady 5% improvement (year over year increases) but the graphics side which sees an embedded DRAM design of upto 128 MB L4 cache that sits aside the Iris Pro graphics core to leverage performance of the graphics core in AIOs and Small Form Factor PC designs.