Yesterday, I posted an article on the upcoming Skylake Desktop platform which will be arriving in 2H 2015 and just a few moments ago, we came to know that the Skylake microarchitecture would abandon the FVIR design that was first featured on Haswell architecture and would exist till the Broadwell generation of processors. 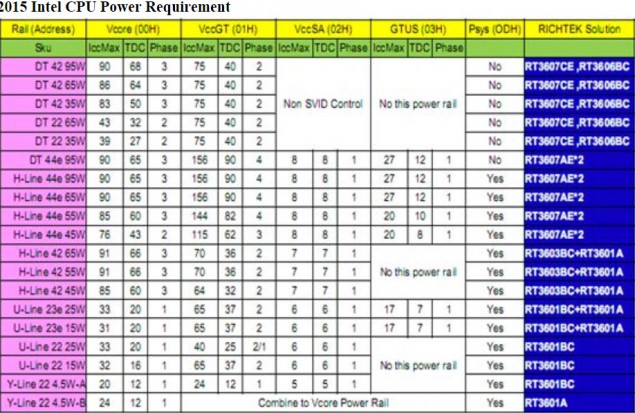 The 14nm Intel Skylake desktop platform is going to arrive in second half of 2015 (July - December) which pits it close to desktop Broadwell that arrives the same year. The recent and latest roadmap which has been leaked explicitly mentions Skylake desktop platform in 2015 and Haswell Refresh for 2014 which are already out in the market excluding the Devil's Canyon (Haswell Refresh K-Series) processors which will arrive on 19-21 June. The roadmap doesn't mention Broadwell on the desktop roadmap even though it was confirmed that Broadwell K-Series would be shipping early next year featuring Iris Pro graphics but Intel's main focus in 2015 would be the Skylake platform hence it is not given as much significance on the desktop front.

The Intel Broadwell will come with a new integrated graphics system as well as a completely unlocked design. Intel Broadwell Y-Series will have 2 cores and a low TDP of just 4.5W. Broadwell will also feature Intel Iris Pro, which also have significant enhancements over the current Intel HD 5000. It will have its own 128mb on-package eDRAM, codenamed ”CrystalWell”. This eDRAM is located on a separate part of the die. It enables the Iris Pro to deliver 25GB/s + 50GB/s eDRAM bi-directional bandwidth.

So back to Skylake, we know that Skylake desktop processors would be compatible with the latest LGA 1151 socketed boards and Z170 chipset which is part of the new 100-Series chipset "Sunrise Point" replacing the 9-Series “Wild Cat” PCH. The second most interesting thing covered is that Skylake processors would have both DDR3 and DDR4 memory controllers so they will support both types of memory. The initial cost of the DDR4 memory while suitable for the HEDT Haswell-E platform won’t be that good for the mainstream Z170 platform hence users will have the choice to stick with cheaper DDR3 sticks till DDR4 prices fall down or upgrade if they have the cash to afford a DDR4 memory kit on the mainstream platform.

Aside from all these details, the SKUs for Skylake have also been confirmed along with their TDPs. The desktop variants will have six different variants which will include the flagship 95W Quad Cores with GT2 and GT4e GPU while the lowest 35W TDP variant will feature Dual Cores and GT2 graphics. The H-Series lineup will also include the 95W Quad Core with GT4e graphics chip but that's the only flagship chip followed by 65W, 55W and 45W Quad Core variants with a mix of GT4e and GT2 graphics. This H-Series doesn't seem to include a dual core model at all. The U-Series lineup will have TDPs of 25W and 15W with the flagship part featuring Dual Cores and GT3e graphics while the other models consist of GT2 graphics. Last up is the Y-Series Skylake lineup featuring two SKUs, both featuring 4.5W TDP and 2 Cores plus GT2 graphics. The difference between them is not clearly mentioned however we think its related to clock speeds. You can get a better representation of the variants in the following chart:

Now these are interesting considering that Skylake will feature GT4e graphics in addition to support for DDR4 memory. Intel Skylake processors will boast a totally new architecture considering they are a Tock when it comes to the Intel Tick-Tock model. The GT4e graphics will feature graphics improvement with more execution units compared to Broadwell which from leaked details is said to mention 48 EUs on GT3e and 24 EUs on GT2 level processors. Broadwell will also be the first processor to introduce GT3e graphics with on-die eDRAM cache on desktop level. Haswell refresh series will also come in different variants such as H/Y/U/S series but will not have many improvements since its based on the same Haswell architecture which launched last year.

The most notable thing is that Intel will actually feature support for DDR3 memory on the Y and U series Skylake chips while the others including desktop processors will support DDR4 memory as confirmed several times before.