You can now have more fun with your Google Nexus 7! Since this product comes straight from Google, so you can well-understand its gullibility in hands of a huge Android hacker and developer base. Since the launch of Google Nexus 7 for the Android tab fans, it has got an overwhelming response and has created a great fan base for its self. However, for most of us the fun with Nexus 7 ends at rooting, unlocking the bootloader and flashing custom ROMs, recovery and tweaks. But there are some who want to take it to the next level. And the progress seems to be fine so far because you can now have the privilege to install Ubuntu On Nexus 7. This is a great break through for Ubuntu fans who like to take Linux every where be it smartphones or tabs. And with consistent development happening for Android, porting Linux onto different Android devices is very much possible and the work load has reduced down from hectic command prompt glitches to single click installers.

Google Nexus 7 debuted with impressive specification and in no time the developers were able to install Ubuntu on it. However, at that time, the installation process wasn't for every one as it required hectic tinkering with some core OS modules. But now, you can download and install Ubuntu on your Google Nexus 7 with a single-click installer that has the ability to do it in minutes!

Before moving on, let us be clear that although the you can get Ubuntu on your Google Nexus 7 pretty easily now, the risk factor of permanently damaging your device isn't completely ruled out. It is important that you know what you are doing and we won’t be responsible if you end up with a permanent brick or any other damage of any sort.

If you have read the disclaimer above and understood it completely, then its time to rock Ubuntu OS on your Google Nexus 7. Also, please read the tutorial for the sake of understanding before you actually embark on it.

Here is what you need to get started:

How To Install Ubuntu On Nexus 7 Android Tablet With Ubuntu Nexus7 Desktop Installer:

1. Once you are sure that you are in possession of a desktop or laptop that runs Ubuntu 12.04 or later and have unlocked the bootloader of your phone, connect your phone to the computer running Ubuntu and use the following command from dash to boot your Nexus 7 in fastboot mode.

2. Once you are in the fast boot mode, unplug any other connected devices to your computer.

3. Now download the Ubuntu desktop installer via the following personal archive. If you are unclear on installing personal package archives, please head to this awesomely written post on PPA installation and some other great information. If you already know how to download via PPA using command line, then here’s the code:

4. Once you are done with installing the Ubuntu Nexus7 Installer, use the dash to search it and you’ll see the following on your screen: 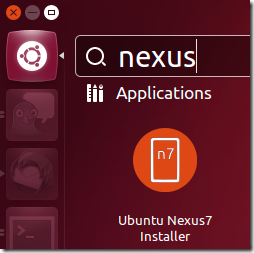 5. Now while making sure that you still have your Nexus 7 connected to the computer, double click Ubuntu Nexu7 Installer icon.

6. After this, follow the onscreen instructions. This Ubuntu Nexus7 Installer will download the latest Ubuntu image for your Nexus 7 and will flash it automatically on your tablet. The whole process should take 15 to 20 minutes depending on your internet connectivity speed.

And there you have it! If everything went as planned, you’ll be enjoying the sturdiness and smoothness of Ubuntu on your Nexus 7. And in case your stuck or need some further information, then it is highly advised to head on to this Ubuntu Wiki for Nexus 7 and read the procedure for better understanding. The whole credit for this tutorial go out to the awesome developers who were able to make your life easier by first porting Ubuntu on Nexus 7 followed by making it further hassle free by release a single click Ubuntu Nexus 7 Installer. A lot of discussion is happening on XDA regarding this and you can head to the official XDA thread to interact directly with Ubuntu gurus and developers of this port.

Please note that installing Ubuntu on your Nexus 7 deprives it of the Android OS. Please head to this link to revert back to Android easily.