The world of jailbreaking is massive, allowing users to customize their iPhones, iPad or iPod touch in ways one can't imagine. But of course, in order to take full advantage of jailbreaking, you need to have a jailbroken device at hand, something which is not easy to come by, especially if you're sitting on the latest release of iOS that cannot be jailbroken in the first place. And while we wait for a potential jailbreak to arrive for the latest version of iOS, a store / app called Extensify has been launched for iPhone users, allowing them to install tweaks without the need for jailbreaking an iOS device in the first place. 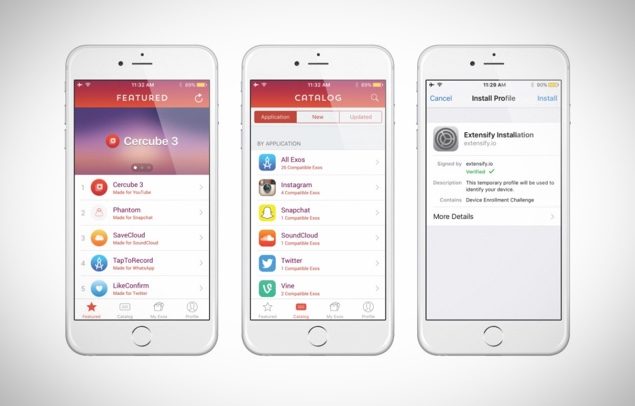 Extensify Lets You Tweak Apps Without Having To Jailbreak Your iPhone

The way Extensify actually works is quite genius. Rather than tweaking the installed app itself, Extensify lets users install tweaked versions of apps that will coexist along with the original that has been downloaded from the official App Store.

The installed tweaked apps are dubbed as 'Exos,' and are denoted by a '+' sign next to them on the home screen. For instance, if you have installed a tweaked version of Facebook or Twitter, then new apps with names 'Facebook+' and 'Twitter+' will be visible on the home screen as well. Pretty straight forward and we're sure users will get the hang of it soon.

Apps that have been modified with tweaks —called Exos in Extensify language— contain a ‘+’ sign after them for easy identification. So, for instance, if you modify YouTube with the Cercube Exo, a new version of YouTube will be deployed to your Homescreen called YouTube+. It’s totally possible to have two of the same apps installed at once—one stock and one ‘+’ version. Of course, you aren’t forced to keep the stock app, but it is a nice side benefit to be able to run two versions of the same app.

Interestingly, Extensify is seeing a soft launch at this current point in time, majorly to keep a low profile, we're assuming. And sifting through different social media outlets reveal that promo codes for Extensify are being handed out to users, which will continue to be done until Extensify hits the final version for release.

If you're looking to get started with Extensify and want to grab yourself a promo code, then simply head over to this link. Also, it should be worth pointing out here that users should have at least iOS 8 or iOS 9 installed onto their iPhones in order to take advantage of Extensify.

We recommend that you jump onboard the bandwagon quickly as it's unclear whether or not Apple will take this service down.