[Update]: Instagram has officially rolled out the feature to all the Android and iOS users. Version 7.15 brings the multiple account support, starting today.

You can now add up to 5 Instagram accounts and quickly switch between them without having to log out and log back in. This is included on version 7.15 for iOS and Android, available in the App Store and the Google Play Store.

After rolling out super-annoying 60-second long video ads, Instagram is finally giving users something that they have wanted for a long time. Here comes the support for multiple accounts! 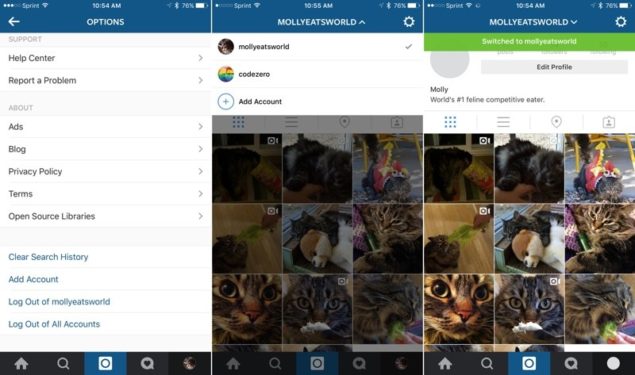 Acquired by Facebook, Instagram is testing the feature of multiple account support on its iOS app. According to a few reports today, the photo sharing social networking app has already started rolling out the feature to some users. We aren't one of those lucky first users, but if you are, don't forget to brag in the comments.

Users are reporting having this ability to log into more than one account in Instagram on their iOS devices. For those who have access to this feature, you will find a new option Add Account in the Settings menu. Similar to Twitter, you will now be able to use multiple accounts on Instagram, and switching between them will be an easy feat too. With the choice of logging into Instagram with multiple accounts, notifications for Likes, Follows and Comments will also have a header letting you know which account received a particular alert.

Whew! No longer signing in and out of Instagram to keep track of multiple accounts. It took Instagram so long, but at least it's showing some signs of coming to us now. Remember, the photo and video sharing app showed some similar signs on Instagram for Android earlier in 2015, when it started testing the feature. However, the feature wasn't released to the public. Let's hope this is not one of those dead ends and Instagram does finally roll out multiple account support.

Again, don't forget to let us know if you have received this most-wanted feature in Instagram.