NVIDIA is going to launch Maxwell in less than 10 days and manufacturers are ramping up marketing campaigns for their next generation solutions which will be featured on the GM204 GPUs. On 19th September, NVIDIA will introduce their GeForce GTX 980 and GeForce GTX 970 graphics cards. In the meantime, NVIDIA has planned an press event for tomorrow where they will be unveiling some details to the public regarding their upcoming chip however the event will not be live streamed unlike the Game24 event which is scheduled for 18th September and will run live for the entire day. 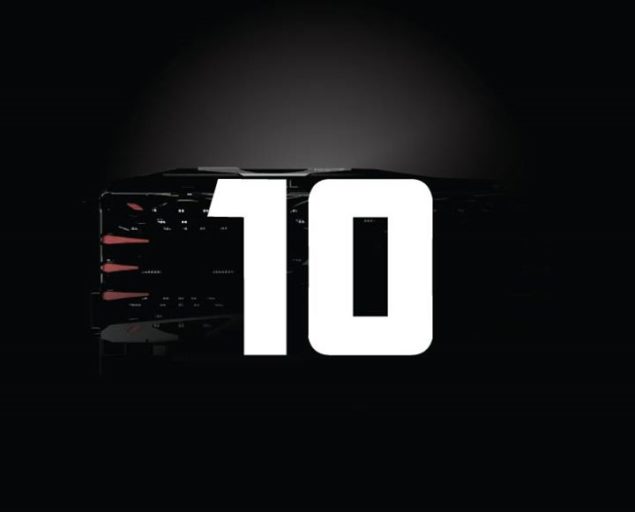 Inno3D has been an NVIDIA AIB partner since as long as you can imagine. They have released some very brute and impressive designs over the last couple of years, mainly their iChill series which feature a top of the line air cooler to cool down NVIDIA's flagship cores. Inno3D started from its roots based in APAC and followed into the UK and US markets and is a renowned brand nowadays. While Inno3D has released iChill and HerculeZ variants in both markets, it seems like Inno3D is finally giving a major update to their iChill series cards with the arrival of the next generation GeForce GTX 980 iChill graphics card.

Inno3D showed off a teaser at their Facebook page which shows a dark object in the background and a large 10 logo hiding the details. The 10 here represents the days left in Maxwell's launch and the card being showcased is non other than the flagship GeForce GTX 980 which will be introduced along side the GeForce GTX 970. While the 10 text blocks us from extracting much details from the card behind it, we can see that the card is designed to be a monster. From the looks of it, Inno3D might just go with an all black color scheme and textures of red on the cooler shroud. The card features three PWM controller fans and looks like there's some assembly on the side of the card which can be there to support the PCB from the massive weight of the cooler. The card uses dual DVI, HDMI and a Display port for connectivity. We can't extract any more information from this image but judging from the marketing, Inno3D will showcase a new teaser each passing day so we will have new details for the next couple of days.

MSI also teased their Twin Frozr V Gaming solution for the GeForce GTX 980 and GeForce GTX 970 cards last week with a new and improved design scheme. The entire manufacturer portfolio is gearing up their new cooling and custom designs for the GeForce 900 series Maxwell cards and we might see some impressive designs this time around. The GeForce GTX 980 is expected to hit a retail price of $499 US while the GeForce GTX 970 will carry a price of around $399 US. Some performance numbers were revealed a few days ago which show the gains over the GeForce GTX 780 Ti parts and even some mobility Maxwell numbers but the data is preliminary so we will suggest to wait for the final details regarding the cards.