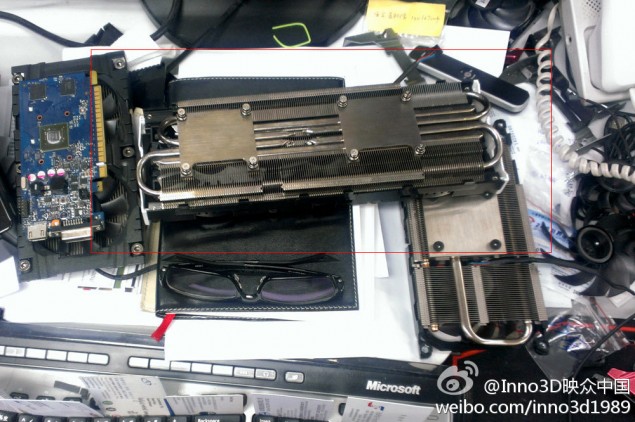 Inno3D who have developed some amazing cooling designs over the last few years, namely their HerculeZ cooler are once again preparing a massive new cooler which will be featured on the GeForce GTX Titan Z. It is unknown at the moment if the cooler will be shipped aside the reference GeForce GTX Titan Z graphics card or would really be assembled on the PCB when dispatched from the factory. Gigabyte and EVGA have shipped their WindForce and ACX coolers with various Titan and Titan Black edition cards so we suspect that Inno3D would also ship the cooler alongside the reference card but nevertheless, let's head on and talk about the cooler itself.

As can be seen in the top picture, the Inno3D HerculeZ cooler for the GeForce GTX Titan Z features a large aluminum fin array that spans the entire length of the card featuring two contact surfaces for each GK110 core on the graphics card. Heat is dissipated through 10 thick heatpipes, five for each GPU core and the heat generated is blown off by three PWM controlled fans on the heatsink shroud (100mm/92mm/100mm). The cooler has a black and white color theme which looks nice and we can also spot a full cover back-plate which will help enhance thermals and hide the components on the back of the card although the reference GeForce GTX Titan Z already comes with one but an extra doesn't hurt.