The iChill GeForce GTX Titan features the impressive GK110 core architecture which boasts 2688 cores, 48 ROPs, 224 TMUs and a 6 GB GDDR5 memory which operates along a 384-bit interface. The iChill GeForce GTX Titan is an factory overclocked variant with core clock of 927 MHz, boost clock is unknown and the memory is configured at the reference 6008 MHz (6.0 GHz Effective) speed. The GPU pumps out an 288.38 GB/s bandiwidth as like other reference GTX Titan variants.

The card uses a reference PCB but comes with Inno3D's mighty HerculeZ 3000 cooler. The shroud of the cooler is colored orange while the internal heatsink seems to be a revision of the older variant making use of five high-Q copper heatpipes which run through a dense aluminum fin array. The block has a copper contact base that is used to convey heat to the heatsink which is cooled down by the triple PWM controlled fans. The hot air is then blown out of the exhaust vents. Display connectors include Dual Link DVI, HDMI and a single Display port while the card supports Quad-Way SLI however best runs with Tri-Way SLI as seen in the reviews.

Gigabyte was also working on a similar non-reference GeForce GTX Titan cooled by their WindForce 3X cooler however reports suggest that the card may not hit retail due to restricition by NVIDIA. Hence that GPU was only built for demonstration GIgabyte's own build efforts. It is unlikely if the iChill GeForce GTX Titan HerculeZ 3000 ever goes on sale, the cover image was posted by Inno3D themselves on their official Weibo page, suggesting that the NDA lifts of 20th May. Pricing has not been detailed yet. 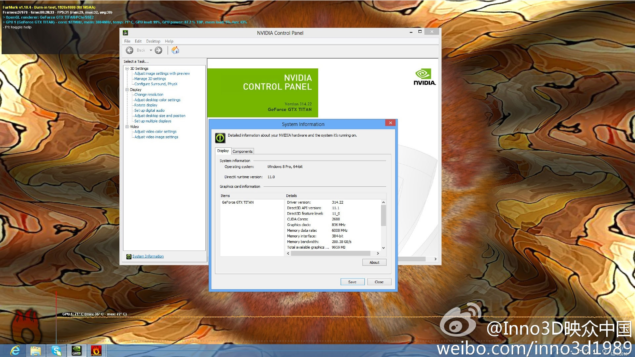