The GTX 780 along with the GTX Titan are Nvidias Flasghip Graphic Cards, and for good reason. The 780 is basically a cut down version of GTX Titan and the GTX Titan is, well the GTX Titan. Recently Inno3D Announced Two GTX 780s. Though we were expecting the iChill GTX 780 HerculeZ 3000 x3 Ultra (wow that’s a mouthful) the iChill GTX 780 Accelero Hybrid came as a very welcome and pleasant surprise. Both of iChill’s GTX 780 are factory over clocked and will be one of the most powerful Single-Chip gaming solutions available.  In fact Inno3D claims these beauties will be faster than a stock GTX Titan! 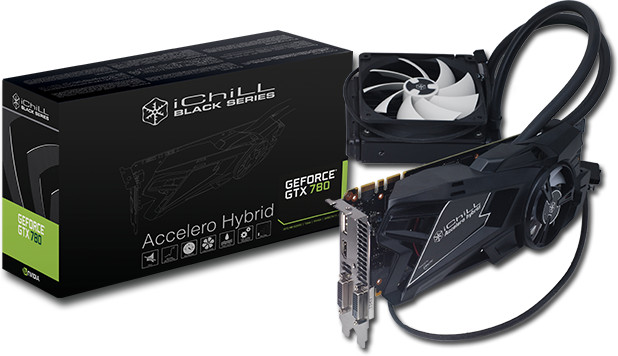 Featuring a Hybrid Air and Watercooling solution this beast of a Graphics card will offer nearly Half the temperatures compared to stick GTX 780 and almost negligible sound output, whil at the same time giving highly stable factory over clocked performance, though at these low temps, Gaming enthusiasts could attempt to further over clock.

The iChill Accelero Hybrid GTX 780 very cleverly deploys a dual cooling solution; with Watercooling for the GPU chip and Air cooling for the RAM and VR. The GPU temp is a bare 44 Degree at full load which is remarkable considering the fact it is over clocked. It also outputs only 0.4 Sones as compared to the 3.8 Sones of a stock GTX 780.

Now this card we have seen before in great detail and is also a masterpiece in the cooling department, featuring an over the top Triple Fan cooling solution.

This is also one of the better GTX 780 Models on the market and hey if it can beat a GTX Titan what more could you want! The sound levels are also pretty impressive >30dba. Overall a good choice if you are not into water cooling.

There is no word on pricing and ship date.