[Updated] Injustice 2 PC Has Been Listed By Amazon France

[Update] The PC version of Injustice 2 has also been listed by Dutch retailer GameMania. According to the listing, the game should release later this year. 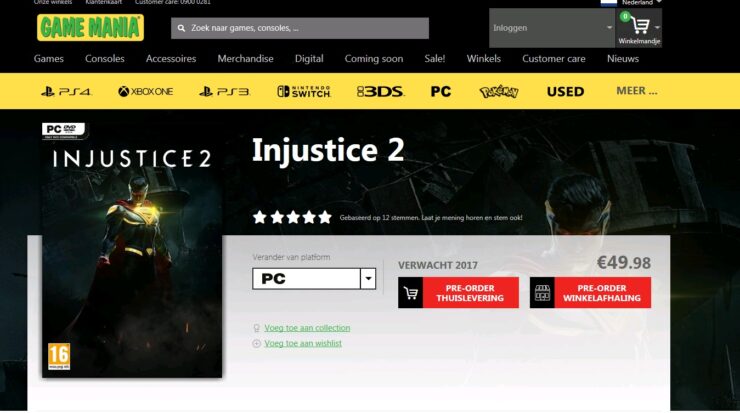 [Original story] Injustice 2 PC has made an appearance on the French Amazon website.

No further details have been provided, and only the Deluxe Edition of the game has been listed for a PC release.

Whether this listing accurate is unsure at this point, but it wouldn’t be the first time that Amazon lists a PC version of Warner published title months before its official announcement – Mortal Kombat 9 for PC was also listed by Amazon prematurely.

Released for both PS4 and Xbox One earlier this year, Injustice 2 was officially announced back in June of last year. “In Injustice 2, we are introducing new features that will change the way fans play fighting games,” said Ed Boon, Creative Director, NetherRealm Studios.  “We’re always interested in pushing the genre forward and allowing players to customise and level-up their favourite DC Super Heroes and Super-Villains is a significant leap.”

“Expanding the DC Universe in games continues to be one of our top priorities, and Injustice 2 showcases amazing gameplay and an original story to bring the characters to life for players,” said David Haddad, President, Warner Bros. Interactive Entertainment.  “NetherRealm Studios is offering fans an experience of customising and battling with DC’s iconic characters in an entirely new way.”

Injustice 2 is available now globally for PS4 and Xbox One.

Thanks to SHREDDER for the heads up.