With the rise of Chinese smartphone OEMs that incorporate incredible hardware and stamp these devices with a very affordable price, Infocus M810T is yet another product that will not only take the fight to OnePlus 2, but the $160 price will also play along nicely with consumers. 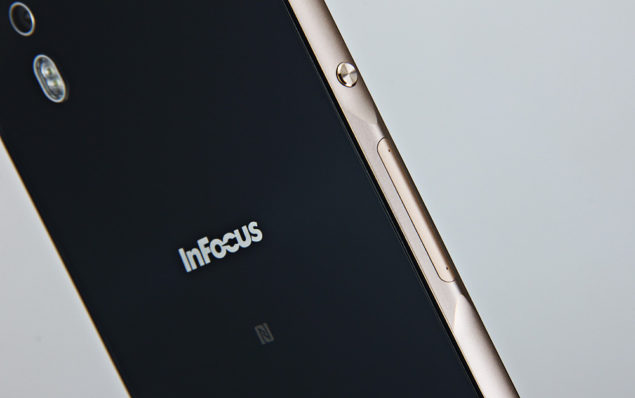 Infocus M810T Features A Snapdragon 801, And Has A Beautifully Designed Chassis

There are very few smartphone manufacturers that pay attention to copious amount of detail and surprisingly, Infocus decided to spend a large portion of its time and effort in making sure that the device looks as appealing as possible. According to the images, the smartphone sports a very beautiful looking chassis, and has a holographic type outlook emanating from its rear side. Since the handset is available to purchase in several color schemes, consumers will most likely choose that one which looks strikingly beautiful from the rest.

Coming to the hardware specifications, Infocus M810T might feature a Snapdragon 801 and 2GB of RAM, but it is still a powerful mobile device in its own right, especially when it is compared to the remainder of the competition that feature the same hardware. For example, according to Xiaomi Today, in the AnTuTu benchmarking score, the smartphone exceeds smartphones such as HTC One M8, and Galaxy Note 3, which cost much more than offering from the Chinese smartphone firm (which is running 3GB of RAM compared to 2GB of RAM present on Infocus M810T).

One of the reasons for a higher score is that the company has stated that despite running Android Lollipop 4.4.2, the interface of the smartphone is extremely optimized and instead of adding more detail to app icons and the background, the company has adopted a flat interface, which delivers a combination of both appearance and performance. Secondly, there is less amount of bloatware, which will make the resources of the smartphone free to tackle the more concerning tasks and operations.

The 5.5 inch frame resonates a resolution of 1080p, which was the right decision. Coming to the internal storage side of things, there might only be 16GB of internal storage present, but the company has incorporated a MicroSD slot up to 64GB; a crucial feature that is not present in OnePlus 2, or OnePlus One. Coming to the price/performance ratio, we have listed a ‘points per dollar ratio’ according to the scores achieved by both Infocus M810T and the 3GB RAM model of OnePlus 2. The image has been posted below. 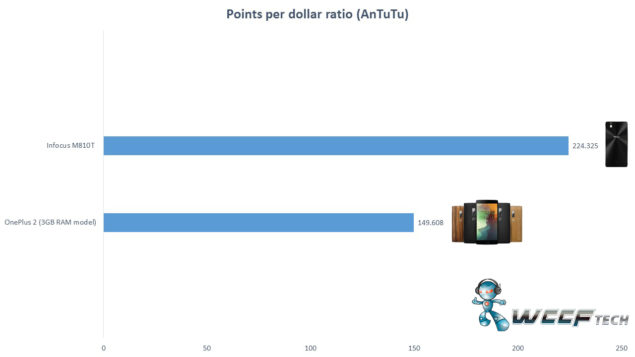 As you can clearly see, Infocus M810T is the much better product to purchase. For those who are interested in purchasing the handset for $20 cheaper than the actual price can avail this golden chance to use a coupon present on Xiaomi Today’s website. We would like to hear your thoughts on the smartphone. Do you guys feel that it would be a very good purchase in a $160 package? Let us know your thoughts.