VR-Zone team managed to find out Gigabyte's latest G1.Assassin 3 motherboard at IDF13 which is the successor to the G1.Assassin 2 which made its debut with Sandy Bridge-E. The G1.Assassin 3 has been released specifically for the latest Intel Ivy Bridge-E processors featuring the X79 chipset and LGA 2011 socket. 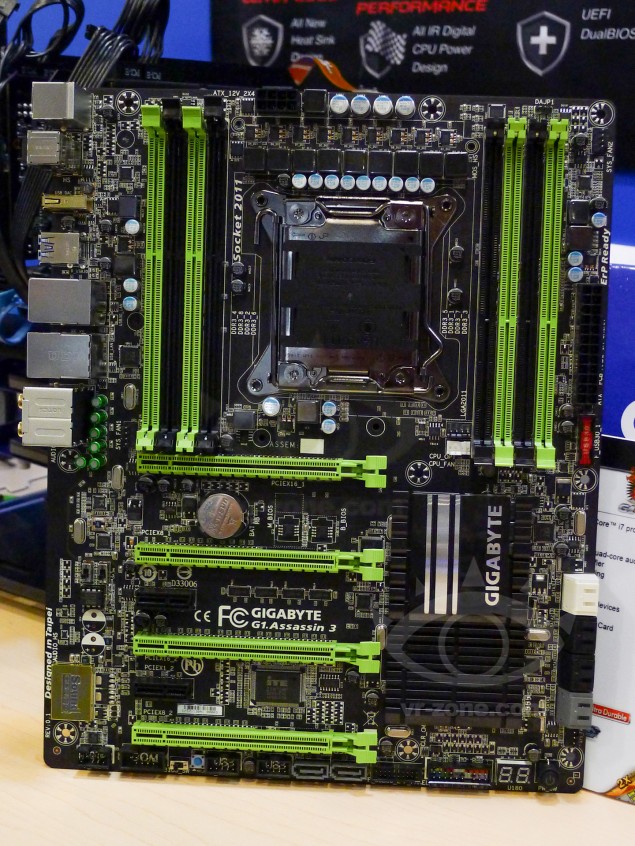 The G1.Assassin 3 is equipped with a 10 Phase VRM featuring an All IR digital power design, durable black solid state capacitors and is powered through 8-Pin + 4-Pin connectors. The motherboard is still in development phase hence the heatsink on the PWM is missing. There are eight DDR3 memory slots offering support for Quad channel memory,  no speeds were mentioned. For storage, the board offers ten SATA 6 Gbps ports while expansion slots include four PCI-e 3.0 16 slots offering Quad GPU functionality with AMD CrossFireX and NVIDIA SLI capable GPU.

The motherboard retains the distinct G1 Green and Black color theme from Gigabyte and the final heatsinks would also feature a similar design. A major upgrade over the past model is the addition of the onboard audio quad core processor - the Creative Sound Core3D. The G1.Assassin 3 also offers Built-in front audio headphone amplifier, Audio Noise Guard with LED path lightning and replaceable OP-AMP design that has been used by various other motherboard manufacturer's this time around.

Gigabyte's G1.Assassin 3 is also bundled with a Bluetooth 4.0 and 11ac Wi-Fi add-in card. The motherboard packs the latest Ultra Durable 5 enhancements and comes with a UEFI Dual BIOS. For I/O, the G1.Assassin 3 includes a bunch of USB 3.0 and USB 2.0 ports, PS/2 ports, Gold plated Gaming Device port, Dual gigabit Ethernet Lan ports and an 7.1 Channel audio jack. You can also find a few On/Off switches and a Debug LED on the motherboard. Gigabyte didn't mention the launch date or pricing of their G1.Assassin 3 motherboard. 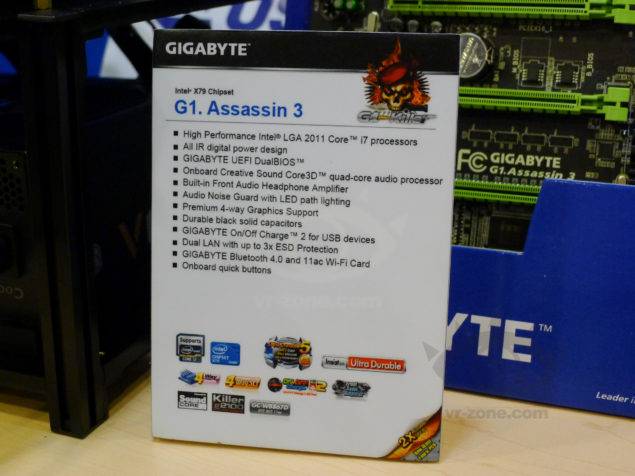