Intel's IDF 2012 is already underway over at San Francisco and we have finally got some key details on the 2013's Ultrabooks which would features the 4th Generation Core processors family "Haswell".

According to various documents, Intel Haswell Ultrabooks would be split into standard and high end models which would feature variable price range and specifications. For instance, the standard models would be priced around $699 and come with Nine hours of battery life, 720P HD Video chat, WiFi, Wireless display and a multi touchpad.

Consumers would additionally be greeted with a bundled Anti Malware protection suite along with Identity protection technology shipped with the OS. On the storage side, Intel is looking forward to 16GB Nand SSD to these Ultrabooks. The same device would manage 16000 marks in PC Mark Vantage HDD and PC Mark Vantage Video score of 80MB/s. 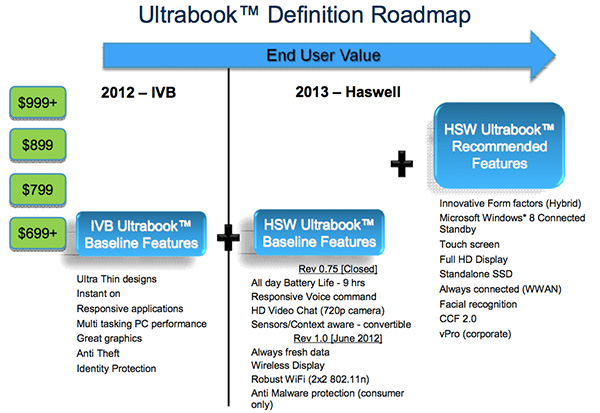